Video: Epica releases first trailer for “Requiem for the Indifferent” 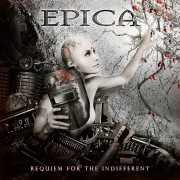 Dutch symphonic metal band Epica will be releasing a weekly teaser for their upcoming album Requiem for the Indifferent due out March 9, 2012  on Nuclear Blast. The teasers will be released as layers with the first being the drums from Monopoly on Truth. The band does a better job explaining it below:

“Here we are with the first official teaser of the upcoming album “Requiem for the Indifferent”, which will be released by Nuclear Blast on March 9th (March 13th in the US). This time however we’re doing it like no one has done before, by weekly releasing an extra layer of music, giving our fans a little more insight in the complexity and the different aspects of Epica’s music.

As this is the first video in the series, you’ll only hear Arien’s drums. However, the next 7 weeks we will add layer by layer, and make the sample longer and longer. Through these videos we will also weekly release backstage pictures, pieces of the album artwork, tour updates, etc, to make the wait for the album just a little bit more bearable!”