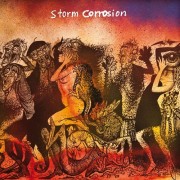 Opeth’s Mikael Akerfeldt and Porcupine Tree’s Steven Wilson have collaborated many times before, but never as a singular force. Storm Corrosion is that force and their debut album recently released to the masses. Akerfeldt recently gave an interview explaining the division of duty on the album and much more.

This isn’t the first time Akerfeldt and Wilson have worked together, as Wilson produced Opeth’sBLackwater Park, Damnation and Deliverance albums, helping shape the sound Opeth would eventually embrace on the rest of their releases.