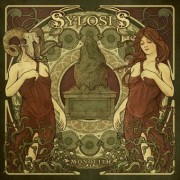 British thrash metal band Sylosis have released a video for their song “Fear the World” off their 2012 album Monolith. Monolith is Sylosis’ third full length album the lyrics were loosely inspired by the story of Orpheus and Eurydice.

Monolith was recorded by Romesh Dodangoda at Monnow Valley Studio in Wales and was mastered by Jens Bogren at Fascination Street Studios. The album artwork was created by Dan Goldsworthy. Monolith was released via Nuclear Blast in October.