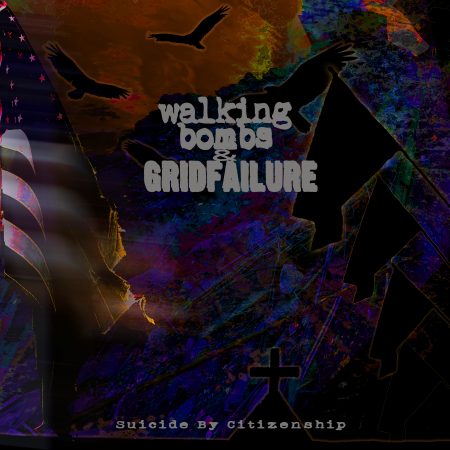 From their impending fully collaborative musical experiment, Suicide By Citizenship, New York solo outfits WALKING BOMBS and GRIDFAILURE present a new video for the emotive eco-collapse movement, “Bare Shores Bleed.” The video makes is public debut through a premiere at New Noise Magazine as the album nears release through Nefarious Industries next week.

With the “Bare Shores Bleed” premiere, Evans offers, “Dave mainly wrote this one, but I was really stoked Elizabeth and I sang on it together as the environment is important to both of us. She got me taking care of my health again and has been vegetarian for fifteen years. I also love the nature of where we live in the Catskill Mountains of Upstate, New York and hate that the world is threatened by the careless march of humanity. Also shout out to Jay for spending extra time on mixing this one as there was so much going on. It is thrilling to hear Brett’s chaotic guitar swells, which remind me of nature’s wrath.”

Brenner offers, “Our planet is in peril. We see some of the most devastating ecological disasters happening right in front of our eyes, we watch species go extinct daily, we clear millions of acres of woodlands yearly, and each of us throws thousands of pounds of plastic into the planet each year. We have an administration who hires rapists of the EPA to run it, and legions of ‘Flat Earthers’ and ‘coal rollers’ simply defying science and common sense. Political affiliations aside, we all need air and water. Our planet is the highest priority to all of us, and it saddens me when I see so much abuse of it every day.”

Nefarious Industries will release Suicide By Citizenship on eco-wallet CD and all digital platforms next Friday, April 26th. Find preorders at the label webshop HERE and via Bandcamp where several other songs are streaming HERE and HERE.

Suicide By Citizenship is an album created to challenge its own creators with the intent of combining sounds from two outfits located on polar opposite ends of the underground music spectrum. The record blends a wealth of genres into a dystopian alloy of improvised jams, rife with discontent for the contemporary state of American politics, and more specifically, the current administration’s actions and policies.

Suicide By Citizenship was conceived by WALKING BOMBS’ Morgan Y. Evans and GRIDFAILURE’s David Brenner who created the album with producer Jay Andersen (Surmiser). In addition to Mike Score, guest contributions from Thomas Andrew Doyle (Tad, Brothers Of The Sonic Cloth), Laura Pleasants (Kylesa, The Discussion), Brett Netson (Built To Spill, Snakes), Elizabeth Le Fey (Globelamp), BJ Allen (Full Scale Riot), Benjamin Levitt (Megalophobe), and more are featured throughout the album, which was recorded and mastered by Andersen, who also plays on the entire album, with additional recording by Brenner who created the cover art.