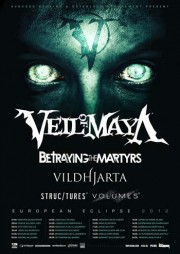 Swedish progressive metal act, Vildhjarta, have released the rehearsal video for their song “All These Feelings” off their debut album “Måsstaden.” The rehersal video dipicts the band preparing for their upcoming European tour which will last from April 27th through May 18th. The band will be playing with Volumes, Struc/tures, Betraying The Martyrs, and Veil Of Maya being the headliner.

To check out the video and the tour schedule click here.

May 3–The Well–Leeds, United Kingdom