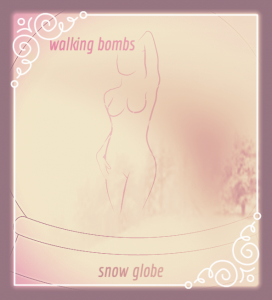 “The song “snow globe” was partly inspired by that band G.L.O.S.S. or War On Women, bands who have spoken out against small minds or objectification and started putting that back into the scene,” Evans says. “I play a few roles in the song and switch voices. It’s like grunge meets doom with Ozzy harmonies. The engineer and I were really into Sub Pop stuff growing up and so we wanted to include at least one really grungy song on this album. You can hear my dog barking at me when I really start screaming.”

The song “snow globe” features Evans on bass and vocals and is the heaviest song on the record, which features everything from indie-garage to acoustic emo to ballads to a weird hip hop track and some spoken word.

“I was always a fan of Beck’s Mellow Gold , The Melvins’ Stag album or Beastie’s Check Your Head where you had no idea what the next track would sound like,” Evans says. “I played some instruments on this album as well, which was rad because in 20 years I’ve mostly just sung. Nowadays people know me mainly as a writer though. But I’d like to change that. This record Know You’re Wild was mostly myself and engineer Jay Andersen of the noise rock band Surmiser bugging out in the woods with weird gear, though other guests are on it as well like Nate Hall of USX fame and Brian Goss of The Noise.”

As far as future plans Evans adds ,”After Know You’re Wild and some stuff from my main band GET OUT. I am doing another Walking Bombs EP that draws from different influences like Julian Cope, Sunn O))) and Nick Cave. That’s gonna be a lot weirder and probably heavier than some of the singer songwriter stuff on this first album, but with like baritone, storytelling vocals. The band name is basically about how I have been trolled by assholes over the years for depression issues and the name is not explicitly about terrorism, certainly not for shock value. I’m a bi sexual music journalist and very inclusive person. I know the name offends some people and it feels weird to be releasing this after the Paris killings but you have to be able to discuss why people become extremists or have mental illness or the effects of intolerance, for example. Stop separation and killing each other or attacking one another. So the band name is kind of a fuck you to that and a rebuke to people who have called me a loose cannon.”