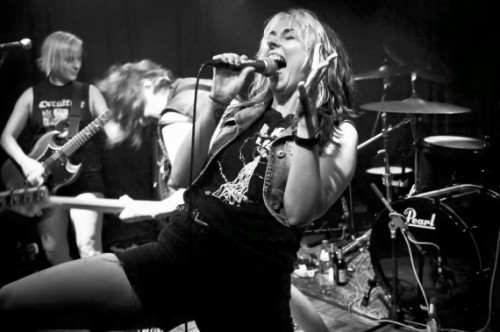 Punk is the genre we cover the least on this site as it is metal’s snotty sister, but when we do write about it…it is usually about War On Women. I’ll go on record and say that the Baltimore band of feminists made INARGUABLY the best punk album of 2015 (followed by Svetlanas and Heartless Breakers at second and third place this year, both of which are slightly more debatable). But War On Women’s S/T record managed to recapture the protest spirit and general fearlessness that made a band like The Gits so important, the co-ed sense of unity and awareness that equal rights go beyond gender.

Punk News has their video for “Say It” HERE. If you have trauma and are easily triggered, be forewarned that it deals with loudly vocalizing your rape or abuse, so any readers or music fans for whom that is difficult here is a heads up ahead of time. Music can make a song’s meaning resonate even more powerfully, and this is a truly powerful and emotional song. And it should be heard. And played loudly at colleges and elsewhere all across the world.

And after you check the new video out over at Punk News, be sure to head back here and read THIS INTERVIEW we did with the band if you haven’t already.