Warbringer Back in Studio to Record Third Album 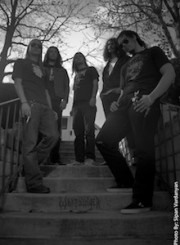 Working on new material since last November, Warbringer will enter the studio next Monday, April 18th, to begin recording their first album since 2009’s “Waking Into Nightmares.”

With producer Steve Evetts (Sepultura, Hatebreed), the band says their goal with this record is “to make something beyond a run-of-the-mill metal CD,” according to guitarist John Laux, “the most difficult challenge is always finding just the right balance between a raw, aggressive sound and modern production standards.”  Laux says of Evetts, “he aims for very organic and bold sounds. His experience in bringing the best out from a wide variety from musicians across different genres of music can be seen in his credits and this speaks for itself.”

The yet untitled new album sees the band welcome drummer Carlos Cruz, who’s had a lot of input into the new material.

Check out some footage here.[youtube]http://www.youtube.com/watch?v=CpwixD9yJW8&feature=player_embedded[/youtube]