Weapons Of Anew touring with Tesla 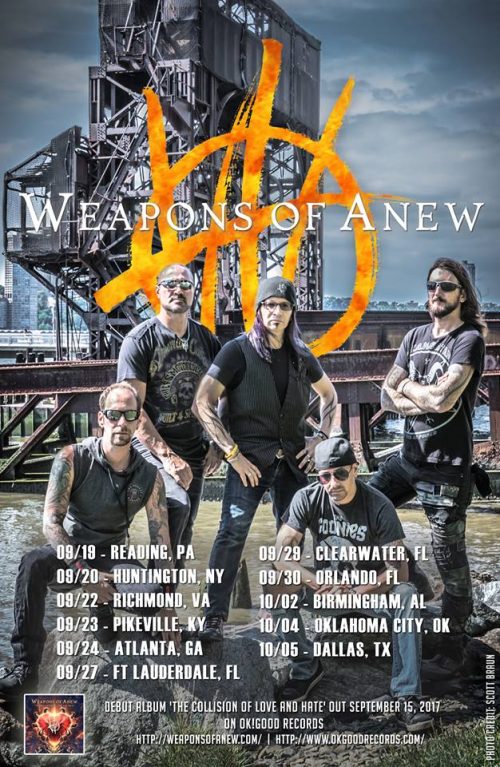 Ray West of Spread Eagle fame has a newer project called Weapons Of Anew hard rock fans will eat up. Ray has always had a commanding yet hooky voice and is capable of hitting you with numerous styles. I had the pleasure of interviewing him about ten years ago (already) for Crusher Magazine and he is such a chill dude. Kriss Norris (ex-Darkest Hour/Scar the Martyr) is part of the group now as well and a record hits in September.

Some fans may be hip to Weapons of Anew already as they worked in the studio with James Murphy of Death/Testament fame and have toured with Alter Bridge. Now the group are hitting the road in the Fall with the classic hard rock band Tesla. Unless you are a new school rock fan, you don’t need anyone to tell you this will be a solid tour. If only Tesla play something from Bust A Nut and WOA cover a Spread Eagle song we can make new little metal babies. Sorry, couldn’t resist that terrible joke. But for real, anyone who can’t appreciate Troy Luccketta is a traitor to metal, haha.

Anyway, check out Weapons of Anew’s recent “Killshot” below (it has kind of a Nonpoint/Fozzy vibe) and get prepped for a rocking time.

More News On Weapons Of Anew:

More On: Hard Rock, Tour, Weapons Of Anew,
share on: