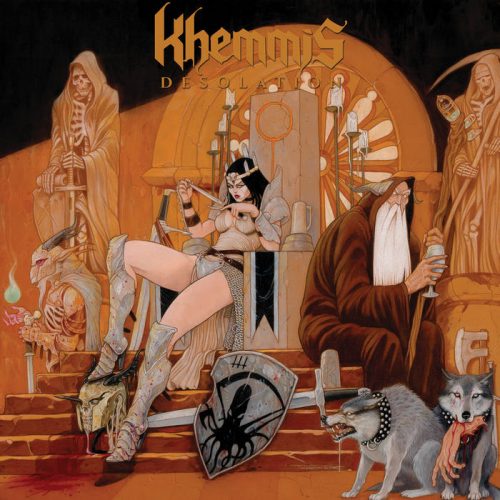 Hey everyone. Can’t believe Trump’s disgusting family separation policy is not causing the full blown meltdown of society. I can’t believe I am even writing about metal right now but I figured I will use the platform to put positivity out there and remind us all to stay strong and committed to keeping the world alive where music and togetherness can defeat evil. Even Andrea Pitzer who wrote One Long Night: A Global History of Concentration Camps agrees that these are exactly that.

Anyhow, here are some highlights for Wednesday of some heavy metal happenings to help soundtrack the grinding of our collective teeth.

The new Khemmis is out this week! June 22nd sees the highly anticipated release of Desolation via mighty 20 Buck Spin. I find it very easy to lose myself in the band’s large and melodic metal-scapes, bold, medieval and classic. Yet they somehow also convey their currency as a vital band of this moment as well, determined to bridge the old way into shaping metal’s forward future trudge.

Anyway, I love this band and “Bloodletting” fuckin’ rips to me. Much like Pallbearer, all their stuff sounds so rad I could never feel the need to really super argue particulars of the merits of newer albums production versus older. I think both those bands are a great example of groups who have so much feel in their work that whatever production approach they settle on it still moves mountains of souls across oceans. Seriously though, “Bloodletting” fucking rocks so hard. Highly recommend the new stuff. They have a solid identity and I trust this band to keep a consistent quality level in whatever they do.

HIDEOUS DIVINITY have announced that they will be embarking on an extensive tour of Canada this Summer. The tour, which runs from July 19 – August 5 and sees the group performing in North America for the first time, will cover a massive portion of Canada and is in continuing support of their 2017 record Adveniens.

Depths of Hatred and Vultures will round out the lineup.

Physical order bundles of Adveniens are available HERE and digital order bundles HERE. The drumming is fucking nuts and so are the unrelenting arrangements. Wish I’d heard this album sooner.

“Sorxe is extremely excited to hit the road at the end of August! We are coming to a select few cities in support of our debut release on Prosthetic Records – Matter & Void. We look forward to seeing old friends and making new ones” states the band on the upcoming tour.

Watch the first ever SORXE music video for “Hypnotizer” off their sophomore studio album, Matter & Void.

Matter & Void is out now on Prosthetic Records. The album was recorded, mixed and co-produced by Matt Bayles (Russian Circles, Botch, Isis) and is available in the following formats: CD, limited edition violet and black swirl LP and all digital outlets.

Catch SORXE live on the “Death Of Summer” tour dates below.