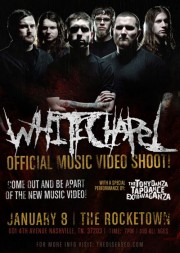 Knoxville Death Metal band Whitechapel has selected Rocketown in Nashville, TN as the location for the new music video for the track “Breeding Violence, off the band’s latest release “A New Area of Corruption” through Metal Blade Records. The video is being shot on Saturday, January 8th with director Scott Hansen. Whitechapel will play a full set and will be joined by The Tony Danza Tap Dance Extravagnaza.

To read what guitarist Alex Wade had to say click here.

Alex Wade comments; “We’re very excited to announce that we will be shooting our next music video for “Breeding Violence” at Rocketown in Nashville, TN on January 8th. Nashville has always been a second hometown for us and with the success of the show there on The Corruptour, naturally we’d love to shoot our music video for our awesome Nashville fans. Our good friends in The Tony Danza Tap Dance Extravaganza will be opening the show so come out and get a shot of being in our video, it’s gonna be a fun night!”