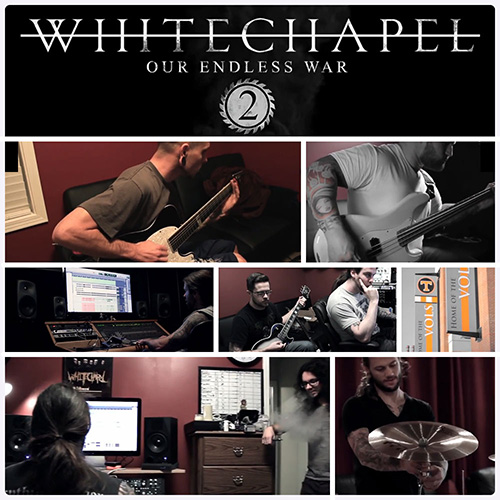 The anticipation continues to build as the release date of WHITECHAPEL’s new album Our Endless War draws nearer.  In a little less then three weeks on April 29th the band’s fifth full-length record and fourth for Metal Blade Records will be released. Our Endless War is a ruthlessly honed album that refuses to compromise on brutality; it is also by far WHITECHAPEL’s most streamlined, atmospheric, and emotionally powerful release, pushing every aspect of their sound to the next level.

During the recording of Our Endless War the band shot a series of behind the scenes and in-studio videos documenting the process.  Today the second video from the recording sessions has been posted.  This episode focuses on the tracking sessions for the album. It showcases each member sharing their part in tracking the riffs that made up the album.

Our Endless War is available in exclusive pre-order bundle packages HERE. The first two singles “The Saw is the Law” and “Mono” can be streamed there as well.

WHITECHAPEL have scheduled a string of shows leading up to the release of Our Endless War from April 16th – April 27th that includes an appearance at this year’s New England Metal & Hardcore Festival.  These dates will begin April 16th in Columbus, OH and run through April 27th in Birmingham, AL.  These shows feature support from Carnifex, Within the Ruins and Cruelhand.

Following those shows, WHITECHAPEL will take part in a co-headline tour DevilDriver.  Support on the tour will come from Revocation, Carnifex, Rivers of Nihil and Fit For an Autopsy.  The tour runs from May 17th in Denver, CO through June 23rd in Austin, TX.

For tour dates and to see the in studio madness, click HERE. Schwing!