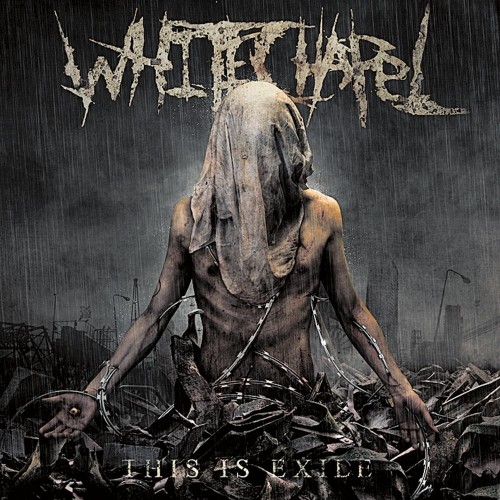 Phil:  Technicality is good but catchiness is what makes songs remembered. I just like it to be pissed. (Fall, 2008)

While they have made better records since, This Is Exile remains my favorite of the Deathcore rulers Whitechapel. Perhaps it is nostalgia from when I first discovered the band and they had a fresh sound that hadn’t been done worse by countless imitators like nowaday, maybe it is because it still has their coolest record art or maybe it is because I fondly recall this funny interview I did with the band around the time …Exile was released.  The following piece was originally published years back in the much missed AMP Magazine (now some dude has a blog with that domain name…lame). It was my first online piece for AMP and thus exists nowhere else now, as that sites awesome content and backend of data is no longer in “cyberspace”. I had great times with AMP and still work with former editor Lisa Root at New Noise Magazine these days. Kinda crazy how time flies and to think I also did the last ever live review of a show for that magazine (a Converge piece done with photog Missmagpi).

Longstanding metal mainstay Metal Blade Records had a great year in 2008, one of it’s coolest ever. Shai Hulud’s MISANTHROPY PURE was probably the apex to date of that bands’ influential career and with Whitechapel’s THIS IS EXILE, Metal Blade can carve one more notch/add one more skull on their belt for releasing a long line of some of the world’s best death metal. Whitechapel are no joke. We’re talking three guitars, an avalanche of massive, cacophonous drums with varied beat-patterns and some of the gnarliest growling this sideof hell. They might be from Tennessee, but their namesake, Jack The Ripper, suits the band perfectly. Their excellent sophomore record THIS IS EXILE is definitely one of the sickest, most grim and yet philosophical heavy albums you hopefully got to hear this year. If you didn’t, what the hell are you waiting for? They are currently ripping out spines on the Never Say Die Tour alongside a diverse array of head bangin’ nutters like Protest the Hero, Unearth and Parkway Drive.

Recently the band has also debuted their new video for the skull crunching “Possession” as well, directed by underground video guru Dave Brodsky (Kylesa, The SmashUp, Three, Opiate For The Masses). This 6 member band is one killer that can’t be stopped and will certainly keep making headlines!I interviewed Alex and Phil from the band while they were storming across Europe causing trouble.

.You’re touring Europe. Hopefully Obama can fix the financial crisis before we are China’s total bitches, but if not, any foreign countries looking good to you guys? I hear that Copenhagen has decent banking.

Alex (Wade-Guitar):  I’d move to Canada, we have friends up there and British Columbiais the most beautiful country side I’ve ever experienced. If not that, Australia, so I could box Kangaroos.

Phil (Bozeman-Vocals):  I would go to Canada so I could at least be close to America. I’m too much of an American to go anywhere else.

.You guys are from tthe Tennessee but the band name is based on Jack The Ripper’s locale. Shouldn’t you be named Channon Christian or something? Also, even though it isn’t the best Alan Moore adaptation, the film FROM HELL about Jack has some cool parts and features Heather Graham as a street smart/tough prostitute. She stays totally bangin’ no matter what age she gets. Thoughts?

Alex: (laughing) Yeah, I guess. We actually got the name of the band by watching the movie FROM HELL. It just inspired the idea.  And yeah I would totally agree.  There’s always something attractive about an older woman who just looks better with age.

Phil:  The name came from internet searching and the movie for sure. I have a secret obsession with Heather Graham. Hopefully she wants me.

. No, me first! What’s most “metal” juvenile delinquent act you ever did growing up?

Alex:  I broke into a coke machine.  Well let me rephrase that.  Attempted to break into a coke machine, almost got caught, our car got towed, and ended up having to walk almost 5-8 miles home.  It’s a story that takes about 30 minutes to tell properly (laughing).

.Woah! That is bad! Phil, maybe you just answered this next question, but…Whitechapel has some of the best growls since Obituary! That’s hard. How did you master that? It’s one of hardest singing styles to sing with projection without puking.

Alex: Phil shoves large objects up his ass, that’s how he gets those weird noises to come out of him.

Phil:  Fuck Alex, I just kept trying new ways to scream and found what I have now. Hopefully I can find more.

.Your band has more dissonance than more boring death metal. I think of you as mainly death even though you have gang vocals. “Messiahbolical” even has a part near the end that sounds like space-dub!

Alex: (laughing) Thanks, yeah we try to make our music as dissonant, creepy, and atmospheric as possible. The end of “Messiahbolical” was part of a song that our guitarist Zach (Householder)  wrote for his old band.  We liked it and thought it was really unique sounding so we used it.

Phil:  Damn right, heaviness is the key. It isn’t heavy metal without the word heavy and dissonance is heavy. I love death metal but I hate just constantly hearing blast and thrash. Gotta mix it up.

.Not to take away from the serious side of the band, but…how fun is it to yell “AHHH! THE FATHER OF LIES!”?

.Whitechapel, like Sweden’s Closer on their recent A DARKER KIND OF SALVATION LP (on Pulverised Records), play technical but it still packs punch. Often it’s one or the other. Very cool!

Alex:  Thanks man, we try to keep it interesting and brutal at the same time.  We like catchy and melodic hooks, some technicality, and making our music hit as hard as possible.

Phil:  Technicality is good but catchiness is what makes songs remembered. I just like it to be pissed.

.Any non-metal songs you play in the candle-lit hours for the ladies? Or if they don’t like it do you say “Kiss it or miss it?” What’s your favorite Weezer song? I like “Say It Aint So” because of the King Diamond poster in the video and the riffs rule.

Alex: Actually, a lot of the dudes in the band listen to very un-metal stuff (laughing).  One of my favorite bands is Sigur Ros.  My favorite Weezer song is “My Name Is Jonas”.Doesn’t get any catchier than that.  I love the opening guitar line.

Phil:  I love “Mykel and Carli” by Weezer the most for sure.

You had, like, 15,000 Myspace plays the other day. Is this STILL exile if everyone likes it?

Alex: (laughing) I guess that is contradicting, huh?  Just because it’s exile doesn’t mean everyone can’t like it, it just makes us more kvlt and underground to listen to.

Phil:  Everyone has their opinions on both CDs but we are still Whitechapel no matter how much people like our first CD more than TIE.

.I was just at a bar and overheard some girls say they hate puking so they take laxatives. Very depressing.

Alex: (laughing)Yeah, that’s gross as hell.  Girls suck at life in general.  All of them…. except Mom’s and Grandma’s, and well actually, even some of them too.