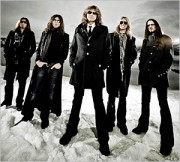 David Coverdale, the shaggy-haired frontman of 80’s glam metal band, Whitesnake, appeared on the radio show “Rockline” with host Bob Coburn on March 30th to discuss the band’s latest album, “Forevermore”, which was released on March 29th on Frontier Records. Fans can listen to the interview now available on the Rockline Radio’s Web site.

“Forevermore” is the follow up to 2008’s “Good to be Bad” and is consistent with their signature bluesy, rootsy,  metal-infused rock ‘n roll the band is known for. Recorded, produced and mixed by Los Bros Brutalos (Coverdale, guitarist Doug Aldrich and Michael McIntyre), the album is available as a single CD, double vinyl LP, as a CD/DVD combo, which features the video for “Love Will Set You Free” and bonus tracks on the CD, or a special limited edition box set with CD, DVD, LP and poster, sticker and cover litho.