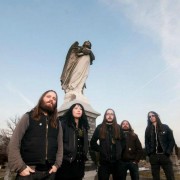 “We’re all so honored to be in the company of so many amazing artists. To know that our next record will be alongside some of the albums that inspired us to play music is pretty incredible.”