Winds Of Plague release teaser video for track “Drop The Match”, new album “Against The World” out tomorrow 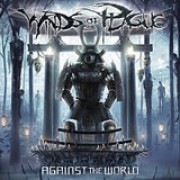 California death metallers, Winds Of Plague, are gearing for the release of their new album “Against The World,” which is out tomorrow on Century Media. The band has released a video teaser for the track “Drop The Match,” which was directed by Shan Dan.