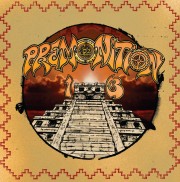 Metal-lifer and frontman of legendary acts such as Saint Vitus, The Obsessed, Spirit Caravan, The Hidden Hand and Shrinebuilder, Scott “Wino” Weinrich, has some how managed to launch yet another band despite his busy schedule. Premonition 13 is the result of more than twenty years of song writing collaboration with fellow guitarist Jim Karow. So far the band has released two songs (listen to them here) and is planning to release a full length album later this year. Label details have yet to be disclosed.