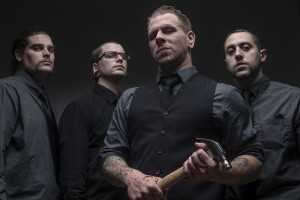 “We took six months off over the winter too eat, sleep and breath this album. It was by far the most in depth we’ve ever gone in the writing process. ” says guitarist Joe Cocchi. Within the Ruins recently posted an exclusive studio report with Gear Gods that sheds more light on the blood, sweat and tears the band has poured into this release. Cocchi continues, “Since the inception of this band our attitude has always been to completely trump our previous efforts in every aspect, and I think we did just that. We’re beyond stoked for people to hear this one.“

The band just wrapped up dates supporting Whitechapel and Carnifex, highlighted by a knockout performance at the 2014 NEW ENGLAND METAL AND HARDCORE FESTIVAL.

Within The Ruins just announced a headlining string of dates with LORNA SHORE and will supporting MORBID ANGEL, THE FACELESS, GOATWHORE and more on this year’s SUMMER SLAUGHTER TOUR. For all tour dates, click here.

More News On Within The Ruins:

More On: Metalcore, Recording, Within The Ruins, Good Fight Music
share on: