Within The Ruins post fittingly titled “Gods Amongst Men” 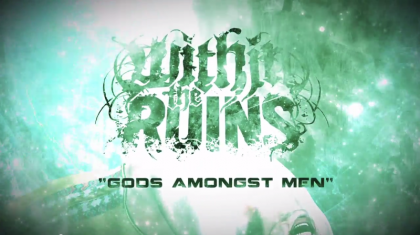 Within The Ruins continue to make some of the spazziest, heaviest and actually exciting metalcore around. One of the best bands on the scene. they put many “peers” to shame. The drive and vision of Within The Ruins shows exponential growth with each album (though I am still really partial to Invade). The guitar work on this new single “Gods Amongst Men” alone is fucking stellar and will shock you at times. Crazy textures, amazing solo sections and some wacky sci-fi sounds atop some accessible mega mosh parts and some tech wizardry…this tune is a great indicator of the show stopping Phenomena they are about to drop on July 22nd. Between this, the new Origin tune and watching with guilty pleasure as Eva Green screwed an invisible devil on Penny Dreadful‘s 5th episode, it has been a nice day.

Click here to enter the ruins.This song is nuts.

“When we released our last album, we felt like we had finally found what we were wanting to do since we started the band,” explains guitarist Joe Cocchi. This is the first time we’ve heard new music from the band since their previous effort Elite, which came out early last year. Cocchi continues, “We’ve been known for technical, faster metal. But it’s the type of stuff that’s tough for someone to listen to if they’re not into a very, very specific sub-genre.” The challenge we gave ourselves with Phenomena was to come up with something even better in a shorter amount of time, to really take advantage of the momentum.”

The band is already off to the races paving out it’s tour schedule like a surgeon’s scalpel. Within The Ruins will be out in full force on this years SUMMER SLAUGHTER TOUR and will be out with Lorna Shore before then. View all dates here. When we asked Joe what fans can expect he stated, “Our fans really embraced our last album. This one completely tops it.”

Those who pre order Phenomena via iTunes will receive two tracks right away, “Gods Amongst Men” and “Calling Card.” An array of pre-orders are also available which include hats, shirts, posters and beer koozies. Within The Ruins will also be participating in a REDDIT AMA tonight at 5:00PM ET, click here to participate.

More News On Within The Ruins:

More On: Metalcore, Video, Within The Ruins, Good Fight Music
share on: