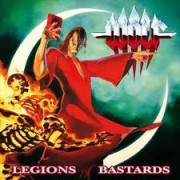 Swedish heavy metallers WOLF will film a video for the song “Skull Crusher” on May 22nd, and it will make its online debut in early June. Morningstar Film Production are in on the making and they also previously worked with WOLF on the “Hail Cesar” video.

“We are excited to work with Morningstar again, and we know it’s gonna kick serious arse!”

“Skull Crusher” comes off their 6th album, “Legions Of Bastards”, which was released last month via Century Media Records, following-up  on 2009 “Ravenous”