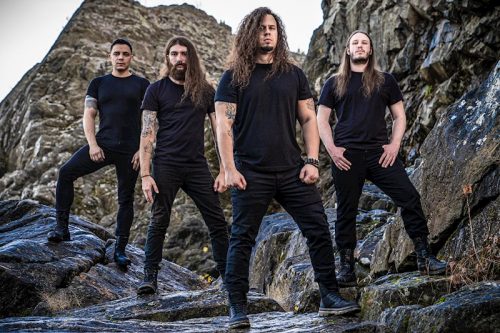 Very impressed today by the new single from epic/extreme metallers Wythersake (Washington D.C.). The song is from their upcoming Scarlet Records debut Antiquity and will turn heads with very heavy aplomb, philosophical themes, a blend of grandiloquent adventurous leanings and death defying guitar solos above and beyond what I expected. RIYL Fleshgod Apocalypse, Septicflesh,  Hypocrisy, Ex Deo.

The record was produced by Wythersake and engineered by Gabriel Luis at Sound Room Media and it seems like they obviously had some incredible chemistry or communication because the results speak for themselves. This is now firmly on my radar and ought to be on yours as well! Hails!!

“‘Iniquity’ touches on the belief that you are wicked and a lost sinner from the moment you are born. The process of teaching this forces people to accept this uncritically – questioning the belief itself is considered a transgression, which creates a type of echo chamber. Ultimately, breaking away from the bonds
of that type of indoctrination is a very liberating and rewarding experience.” – Wythersake