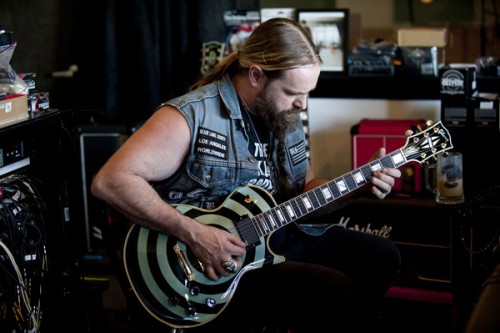 On March 14th, Zakk Wylde’s Pelham Blue Bullseye Gibson LP Custom Guitar was stolen from his tour bus in Chicago during the Experience Hendrix show at the Chicago Theater. It turned up at Royal Pawn, a Chicago area pawn shop that is the setting of truTV’s Hardcore Pawn reality TV show.

A more detailed report on the guitar’s discovery can be read in a yesterday’s story in the Chicago Tribune.

Black Label Society have been announced as the musical guest on Late Night with Seth Meyers on Tuesday, May 6.  The band will perform “Angel of Mercy” from their recently released album Catacombs of the Black Vatican, which debuted at #1 on the Independent, Rock and Metal charts and #5 on the Billboard 200.

Catch Zakk Wylde on tour with Black Label Society, and special guests Down, at the FOLLOWING SHOWS.