David Kinkade, the new drummer for the Arizona thrashers, Soulfly, was interviewed recently. In the interview he discusses how he joined the band, the recording of the band’s new album, drums, and more.

Soulfly’s latest album, “Omen,” was released in May 2010 through Roadrunner Records.

Pheonix thrah metal act  Soulfly will be headlining the 15th annual D-Low Memorial Show at the Marquee Theatre in Phoenix, Arizona on Friday, December 30. Also appearing on the bill will be Incite and Lody Kong. The show is held every year in memory of Max Cavalera’s stepson, Dana Wells, who was killed in a 1996 car accident.

ExploreMusic recently interviewed Soulfly and Cavalera Conspiracy frontman Max Cavalera while on tour with the band in Canada. He discusses playing new material, interacting with the fans, and his interest in classic punk and hardcore music, including the Ramones, Discharge, Bad Brains and many more. Check out the interview here.

http://www.youtube.com/watch?feature=player_embedded&v=fUSVF2N9E7I
Add to My Radar

Frontman for Soulfly and Cavalera Conspiracy, Max Cavalera, has announced that he will be doing a project with Dillinger Escape Plan frontman Greg Puciato. The duo have already worked together on the song “Rise Of The Fallen” on Soulfly’s last album “Omen.” When reached for comment Max stated:

“Everybody ask me, ‘Hey Max, are you gonna do another Nailbomb?’ and the answer is always No, because we killed Nailbomb on purpose. So when Greg approached me with an idea of a project, I said I’ll do it, but it has to be like Nailbomb. I’m gonna share the vocals with Greg. We’re gonna have a bunch of killer guest musicians, and it’ll be the closest thing to a Nailbomb experience. I promise you it is going to be heavy as fuck, angry as fuck, and aggressive as fuck. Me and Greg are pissed off and we’re coming your way!!!!”

Tony Campos will be performing his first show with the band at a Belgian festival on July 31st.

Potential super group made up of Soulfly, DEP, Mars Volta, and Converge 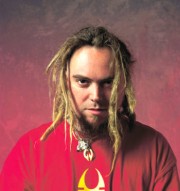 Max Cavalera (of Soulfly and Cavalera Conspiracy fame) wears many hats, but maybe none as ambitious as the project recently described on Dillinger Escape Plan singer Greg Puciato’s facebook as “dark.” The two were previously rumored to be writing an album together, but a recent interview with Cavalera has shed some more light on the project including potential members:

“It’s really in the beginning right now. Greg loves Nailbomb and he’s trying to get me to do a Nailbomb kind of project. He’s saying we can do something very similar to Nailbomb where the both of us sing, like me and Alex  and what we had and it will be what me and Greg have. We’re gonna share the vocals and I think the drummer from Mars Volta might be the drummer and the bass player from Converge might be playing bass and we’re looking for a guitar player right now. But it’s gonna be like a project, not a band like Cavalera Conspiracy or Soulfly. It’s gonna be just a one-off album, something heavy to put out there. Something that me and Greg like to do. I had a great experience with him working on ‘Rise Of The Fallen’ and we became good friends and he started calling me about this ‘Nailbomb part 2’ idea and I couldn’t say no. I just thought it would be great and I’m really looking forward to it. I’d like to do as much music as possible, so he came with a new project for me.”

When asked about a release date, Cavalera added: “It´s not gonna come out until next year, because it´s gonna take some time to get all the people involved and all the writing”

No word on which Mars Volta drummer it is, as they are currently on their fifth percussionist within a decade. Also, it is not clear if the album would release on Roadrunner Records or a label one of the other bands is signed to.

As Phoenix, Arizona natives Soulfly tour Europe and Asia, thoughts of the States are still alive. Amid a massive tour across the pond, they have added new dates to their upcoming United States tour which begins November 26th 2010. This comes as no surprise, as Soulfly have been known for their brutal and grueling tour regimens, thus showing they have no plans of putting the brakes on things once they finish conquering the Eastern hemisphere.

Their current release from Roadrunner Records “Omen” hit stores May 25, 2010, which is their seventh release and you can purchase it here.

Check out the full listing of dates in your state here.