New Music: “Since the Shadows” demo from upcoming Arsis album

Virginia-based melodic tech death metal masters, Arsis, have released a demo of a brand new song “Since the Shadows.”  To listen to the song click here. Commented the band:

“We are indeed writing a new Arsis album and we want to offer everybody a glimpse into the music that we’ve been building for the last few months. This is a demo of a new one called ‘Since the Shadows’ and it’s from the first batch of songs for the album. It’s still early but a musical direction has emerged from the work so far and we think it speaks for itself without any grand pronouncements, so enjoy it and we will see you on the Firewind tour this fall!”

Arsis will tour as direct support to Firewind this Fall starting October 9. Joining them are White Wizzard and Nightrage.

“Starve For The Devil” was released in North America on February 9th via Nuclear Blast records and debuted at No. 13 on the Billboard Heatseekers chart, which lists the best-selling albums by new and developing artists who have never appeared in the Top 100 of The Billboard 200.

The video clip for the Arsis song “Forced To Rock” can be viewed here. 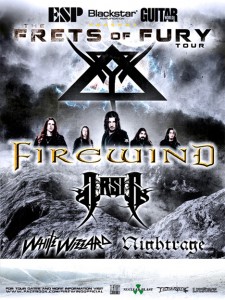 Nuclear Blast Records has announced that tracks from Testament, Meshuggah, Arsis, Death Angel, and Exodus are now playable within the newly released Rock Band 3!  Songs are available now via the Rock Band Network and on sale to the public at Nuclear Blast’s Rock Band site.  Soon to be added will be Dimmu Borgir, Soilwork, Kataklysm, and many more!