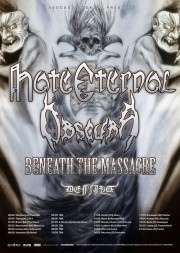 Florida based Death Metal band Hate Eternal announced a headlining European tour to support their forthcoming studio album through Metal Blade Records.  The tour starts on April 29th in Wurzburg, Germany and will end in Leipzig, Germany on May 20th.  Joining them on the tour will be Obscura, Beneath the Massacre, and Defiled.

Death Metalers Hate Eternal are working on their fifth studio album and follow up to Fury & Flames at Erik Rutan’s own Mana Recording Studios. JJ Hrubovcak has been added as the band’s bassist with the return of Erik Rutan on guitar and Jade Simonetto on drums.

Front man Erik Rutan offers the following update: “The band has been locked up in Mana Recording Studios doing pre-production for the past 2 months, finishing up songs that we have been writing over the last year in between tours and albums that I’ve produced, and we feel we have come up with one of Hate Eternal’s heaviest, most twisted, evil, melodic, and insane albums yet.” The Album will be the second released on Metal Blade Records