Gorgoroth and Belphegor have confirmed the seven date European mini-tour, along with Impiety and The Way of Purity. touring begins in late December and ends New Year’s Day. Both Gorgoroth and Belphegor will be in Europe to get on board with the festival, while Impiety wrap up a tour in the U.S. before joining the tour. 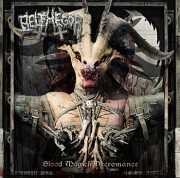 Austria’s black metal veterans Belphegor have revealed the cover art for their forthcoming album “Blood Magick Necromance.”  The band has tapped two artists from Austria to produce the cover. Helmut Wolech (a fetish photographer and former mortician) and Joachim Luetke for the graphics and cover artwork.  “Blood Magick Necromance,” the band’s ninth studio album, will be released on January 14th in Europe and February 8th in North America via Nuclear Blast Records.

The band’s last release was 2009’s “Walpurgis Rites – Hexenwahn” which was also released via Nuclear Blast.

Norwegian black metal band Vreid has announced a 16 show European tour with Belphegor and Emancer in support of their most recent album “Milorg.” “Milorg” is Vreid‘s fourth studio album and was released in January, 2009 through Indie Recordings.

Vreid is also gearing up to release their first DVD “Vreid Goddamnit” at the end of September.