Colorado death metalheads Allegaeon have just released a new single from their upcoming album Formshifter, and oh man is it cool.  The song is 7 minutes of awesomeness called “Twelve – Vals for the Legions”.  It is streaming on Metalsucks right now and you can give it a listen by clicking right here.

Formshifter is due out May 8, 2012 under Metal Blade Records and you can also check out the first single from the album called “Tartessos: The Hidden Xenocryst” over here. 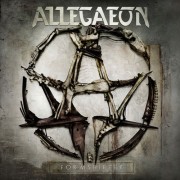 Colorado death metallers Allegaeon send their greetings from Lambesis Studios with Iconic Images. The song is taken from their upcoming May 8th release, Formshifter, out on Metal Blade. Check it out here.

Colorado death metal act, Allegaeon, have announced that they have began writing a new album and are set to record at Lambesis Studios with Daniel Castleman. They plan to start recording in December.

“First off, all of us here in the Allegaeon camp are happy to announce that we will be recording our follow-up to “Fragments of Form and Function” this December at Lambesis studios in San Diego, with Daniel Castleman, who has worked with such bands as As I Lay Dying, Carnifex and Molotov Solution and we are excited to see what Daniel can do with our style.

All the songs are written and we are finishing up vocals and solos as we speak. What can you expect from our new album???? I think we can all say that this album is where we have wanted to be as a band for a long time, its fresh, super heavy, melodic, a ton of groove oriented old school style riffing, just as much blasting as down tempo beats and on a whole the album has very cohesive and consistent sound that mixes intensity with musicality, and as usual there’s about a thousand solos haha. I think people will not necessarily hear what they are expecting to hear, but in a good way.”

This will be the band’s second album with Metal Blade Records.

Colorado’s Allegaeon has recently confirmed a string of tour dates in support of their album “Fragments Of Form And Function”. The tour will begin June 3rd in their home town of Fort Collins, Colorado and will take them as far west as Las Vegas, NV and Escondido, CA before wrapping up June 19th in Wyoming. Fans can get a preview of what Allegaeon is like live via a myriad of bootlegs as well as their official video for “Biomech”.

Get the tour dates and check out the video here.

Fragments of Form and Function was released in July of 2010 and has been praised by fans and critics, as well as receiving generous amounts of air play on SiriusXM’s Liquid Metal, Music Choice Metal, and local metal radio shows worldwide.