UK-based death metallers Winds of Genocide has announced the upcoming debut full-length album as “Usurping The Throne Of Disease”.

the band also recently underwent a lineup change. Roping in as the new Winds of Genocide drummer is Matthew Henderson, and Linus Girdland Flink will now reinstate as the second guitarist.

check out the full line up here.

In an official statement released by the band:

“This is the new line-up that will be writing material for and recording the debut full-length album “Usurping The Throne Of Disease”. Matthew is a great young versatile drummer (still only in his teens, he is currently 17 years old, nearly 18) and he also drums in a local Death Metal band called Plague Rider. He can switch from D-beats, Swebeats and blast beats, which is all we need in a drummer! He has picked up most of the songs we have written so far VERY quickly and learnt the current setlist with impressive ease. We are very happy to have him in the band and onboard for the full length album. Linus, who played drums on our first two recordings and the tracks for the upcoming split with Abigail (Japan), has now moved on to second guitar due to him moving to London so we needed to find a drummer who could rehearse and work on new material regularly.” 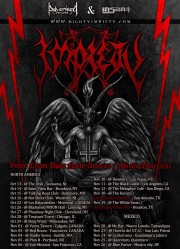 Pulverised Records has just announced the “Vomit Chaos Upon America Tour 2011” featuring Singapore-based black metallers, Impiety. The tour will kick off next Thursday, the 13th of October, and end on the 26th of November, spanning the United States and parts of Canada and even Mexico. It will be a tour not to miss, so click here to check out the dates now. 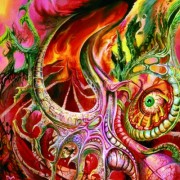 Swedish death metallers Morbus Chron announced details for their upcoming album, “Sleepers In The Rift.” The album was recorded between 15th – 19th November 2010 and produced by Morbus Chron, with Nicke Andersson (Entombed) producing / engineering as well.

The album cover art for “Sleepers In The Rift” was entirely designed by Spanish fantasy artist Raul Gonzalez, who has previously worked with bands such as Deceased, Abraxas, etc. 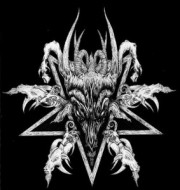 Singaporean black metal band, Impiety, is set to release a newly Remastered “Skullfucking Armageddon”. The album was the bands second Studio album released back in 1999 via Dies Irae Records.

The Remastered version is set to release June 24 via Agonia Records.

Pulverised Records is proud to announce the official signing with the infamous black death warmachine Impiety for their upcoming eighth full length album. The band, which has had a history of 21 over years, stands a champion of the underworld having released crushing albums and triumphed great tours over years of its infernal dominion, pushing boundaries with every great release the band has put forward from inception till this day.

“The best of Impiety has yet to come…” says warlord Shyaithan, concerning the signing. “Writing the upcoming storm serves as a greater challenge to myself and all previous endeavors. One thing definitely to expect is that this new full-length album will hammer you 10 times harder than all previous revelations. Blood and Chaos shall dominate but Lightning Death it’s ultimate crowning glory…”.

Swedish death metal outfit Skineater recently signed with Pulverised Records, and they will commence recording for the as-yet-unamed full-length effort in the summer of 2011. Further information and details will be announced soon.

Pulverised Records A&R manager Calvin Chiang comments the deal: “After we heard about Skineater, it was obviously a no-brainer that their brand of crushing Death Metal fitted the Pulverised rooster perfectly. With their downright devastating and ruthless vibe combined with a slight tinge of melodic elements; we knew there was something remarkable about Skineater! The band is all set to record their debut album in summer, so be prepared for some skin-crawling Death Metal this year!” 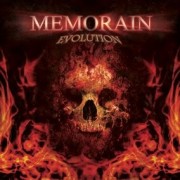 Listen to the track here. 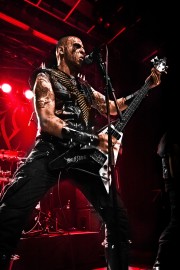 The “Barbarian Black Horde”, mighty IMPIETY are not only Singapore’s most bad ass metal warlords of blackened destruction, but one of the most evil and legendary underground bands in metal. Band mastermind and prolific cult leader Shyaithan is adept at bass, vocals and guitars but also is lightning fast when it comes to hysterical, bad ass one liners and tidbits of awesome worldly wisdom.

Impiety demonstrate their myriad skills to the fullest on their new release WORSHIPPERS OF THE SEVENTH TYRANNY, an epic long player up there in awesomeness with Ufomammut’s recent totally crushing EVE (though much different). WORSHIPPERS is a groundbreaking, masterful and demonic guided tour of hell. You’ll buy the ticket and take the ride but want to go again and again depsite the intensity! Few bands can match the level of bad ass that Impiety exhude on a daily basis. Yeah!!!

Read the Metal Riot interview (re: their storied career as well as the recent Japan crisis) with the defiant riff veteran Shyaithan HERE .

Master, who were scheduled to kick off their U.S. headlining tour earlier this week with support from Lightning Swords Of Death and Mobile Deathcamp, were denied entry into the country and forced to return to the Czech Republic.

Said Master mainman Paul Speckmann in a statement: “We arrived Tuesday morning in Holland and after intense questioning we proceeded to the eye and body scan machine. Along with the other passengers, we proceeded to the plane. We arrived in Detroit and went to passport control. I waited for about two hours for any word on the guys. The police came to explain that the visa waiver program didn’t apply to musicians. So they sent me to customs and proceeded to tear apart everything and sent me on my way. I waited for six hours to get on another airplane and return to Europe. Thankfully the lady at the Delta checkout counter was very helpful and confirmed that the guys would be on the next plane in the evening and I could return with them. The guys were escorted to the plane by four police officers and returned their passports when we arrived in Amsterdam. Since when are musicians and terrorists in the same category? Again I apologize to all the bands, organizers and fans of course. I guess the CD cover of “The Human Machine” CD has become a reality!”

New Song: “In a Cage” from upcoming Desultory album “Counting Our Scars”

After almost 15 years Sweden’s Desultory have reunited and been in the studio working on a new album titled “Counting Our Scars” which is soon to be released through Pulverised Records.  The band recently released the cover art and track listing for the album, and now they have uploaded a new song titled “In a Cage” from the album on the band’s Myspace page.  The album is available for pre-order from Pulverised Records here.

The band’s last release before their breakup was 1996’s “Swallow the Snake” which was released on Metal Blade Records. 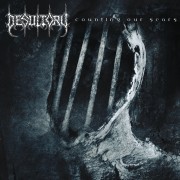