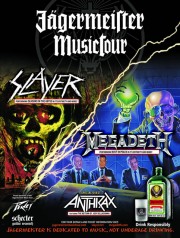 Jägermeister announces the 2010 Fall Jägermeister Music Tour, with the 1991 original “Clash of the Titans” lineup – Slayer, Megadeth and Anthrax. The brand’s 17th Music Tour will bring three of the hardest hitting metal bands in the world to one stage and will feature complete performances of Slayer’s much lauded Seasons in the Abyss Album from 1990, Megadeth’s landmark 1990 album Rust in Peace, and the return of Anthrax’s singer Joey Belladonna. The tour kicks off September 24th and will play 20 venues across the nation.

To read more and see the tour dates click here. 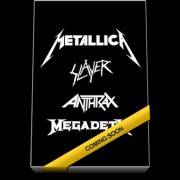 Universal Music has set October 11th as the release date for “The Big Four: Live From Sonisphere 2010” in the U.K. “The Big Four: Live From Sonisphere 2010” will be released in DVD and Blu-ray format and contains footage of The Big Four tour show on June 22, 2010 in Sofia, Bulgaria. The Big Four rock festival marked the first time the big four of thrash metal, Metallica, Megadeth, Anthrax, and Slayer have toured together. The release contains the amazing cover of the Diamond Head song “Am I Evil?” performed by all four bands on stage together.

To see the video of the “Am I Evil?” cover click here. 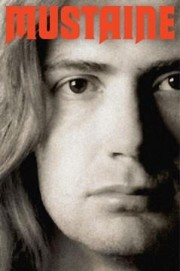 If you don’t feel like reading the whole interview you can check out a few interesting excerpts here.