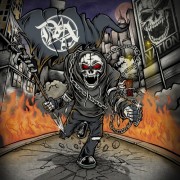 Long Island metalcore band Dr. Acula have released a video for the song “Ironic Enclosure.”  The song is taken from their new album called Nation which is out today June 19, 2012 on Victory Records.

Guitarist Ricky Ostolaza recently said the following about the video:

“The video pretty much sums up how we are not trying to change the world, but accepting that it’s shitty.”

Strong Island metalcore band Dr. Acula have premiered their song Ironic Enclosure off of the upcoming album Nation. Nation is due out June 19th via Victory Records and is a follow up to their 2011 effort Slander. You can listen to the track here.

Long Island Deathcore band Dr. Acula have just released the video for their song Party 2.0, and from the looks of it that’s exactly what they like to do.

The band filmed the video in a Chicago bar filled with people and reportedly there was plenty of real partying going on.

Party 2.0 is taken from their 2011 Victory Records release, Slander.