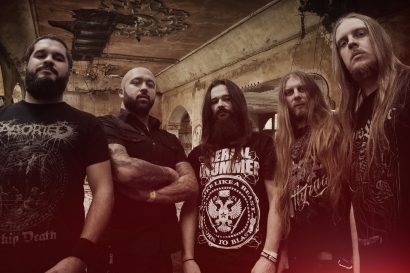 French death-grinders BENIGHTED have announced a fall European tour that sees the band joining ABORTED and CRYPTOPSY. The tour kicks off on November 1 and concludes on November 25. A full list of confirmed full dates can be found below.

BENIGHTED are touring in support of ‘Necrobreed’. ‘Necrobreed’ will “rip you to shreds… Not even a second after the album’s introductory soundbite is over, the French deathgrind outfit are tearing into eleven fast and furious tracks” (Decibel Magazine), and is streaming now at Bandcamp, Spotify, Apple Music, and many more!

BENIGHTED are currently slated for a number of festival dates in 2018 with more live dates to be announced in the months to come. Appearances already confirmed for this year include Hellfest in France, Obscene Extreme Festival in the Czech Republic, Party San in Germany, and many more. A full list of confirmed tour dates can be found below.

French death metal band Benighted have released a video for the song Let the Blood Spill Between My Broken Teeth taken from their 2011 album Asylum Cave released on Season of Mist Records.

The band have also announced they will be playing a number of European festivals in the summer of 2012.