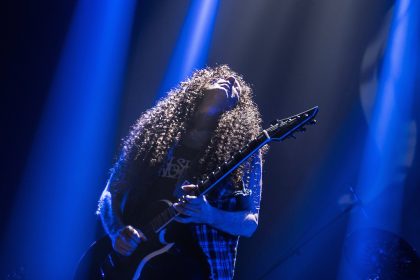 Pinnacle Music Group are absolutely thrilled to announce that the legendary guitar virtuoso MARTY FRIEDMAN will be returning to Australia, for the first time with his full “Super Band” across four VERY intimate venues.

With a career of over thirty years with some of the world’s biggest heavy metal acts on top of an absolutely monumental solo career, Marty Friedman is a household name for guitarists across the world, and Australian fans get the chance to see the legendary shredder himself tear it up onstage in four incredibly intimate venues, giving fans a once-in-a-lifetime opportunity to experience Friedman’s guitar wizardry closer than ever before. 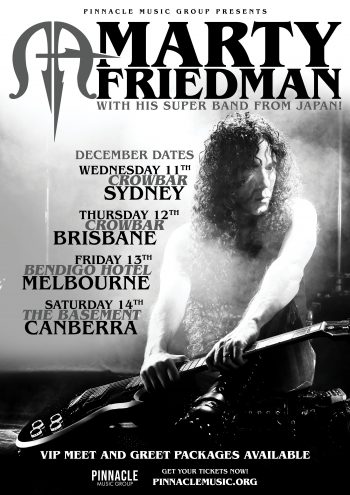 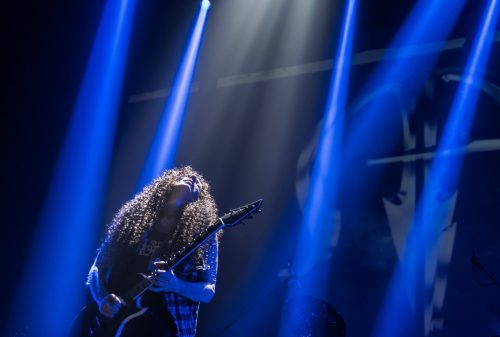 MARTY FRIEDMAN‘s presence in the world of music, the world of guitar, and Japanese pop culture is mystifying, bizarre, and nothing short of inspiring. His 14th solo album, ONE BAD M.F. Live!!--set for release October 19 on Prosthetic Records–is an all-out celebration of his music in its rawest form. Recorded live during his 2018 “Wall of Sound” tour on its final show in Mexico City at Centro Cultural on April 14, 2018, ONE BAD M.F. Live!! is chock full of his own brand of “feelgood aggression.”

He’ll celebrate the release of ONE BAD M.F. Live!! in Los Angeles, CA at the Viper Room on October 21. It’s the only U.S. show he will do in 2018, but at this show, he will officially announce the details of a full scale 2019 U.S. and Europe tour. Tickets are now on sale here.

As seen in the first live music video which premiered today on GuitarWorld.com, “Whiteworm,” FRIEDMAN and his band–Kiyoshi (bass), Jordan Ziff (guitar), Chargeeee (drums)–are all smiles and are in constant interaction with the audience, pouncing on the rhythms and playing such addictive melodies that one doesn`t miss a vocalist for a moment. 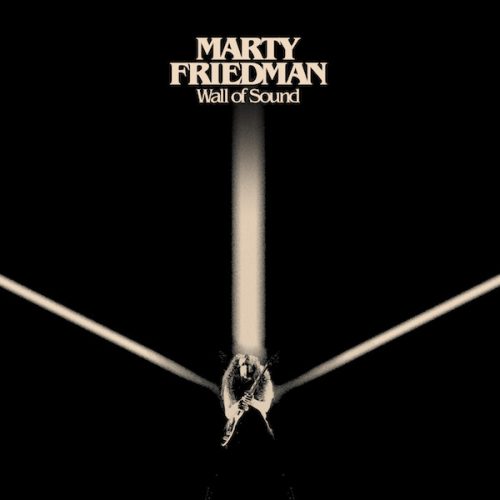 Guitar luminary Marty Friedman has released a new video for the track “Self Pollution” from his Wall of Sound album. It starts as a technical workout that still has a gritty and rock n roll feel to it though other sections highlight Friedman’s melodic lead playing and get downright expansive and meditative before the wild stuff makes a return.

Friedman says, “This video is the first to feature my live band, with Kiyoshi on bass, Chargee on drums and Jordan Ziff on guitar. These guys (and girl) outshine me every night on tour. The video is loosely based on some of the fun ways you can pollute yourself (hence the title) and takes you from serenity to a chaotic climax, just like real life does sometimes.”

Directed by London-based photographer Jimmy Cheng, watch “Self Pollution” below. 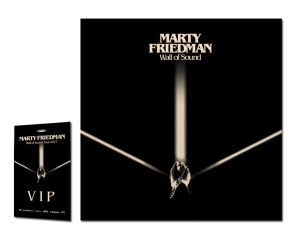 Marty Friedman is always one of the coolest shredders going, just a next level player who is not afraid to take leaps of faith. Now Marty returns in August with his latest release Wall Of Sound, continuing his inspired team up with Prosthetic Records. Some kick ass collabs on this one again as Black Veil Brides, Shining and Deafheaven members have cameos. And of course it is chock full of Marty. 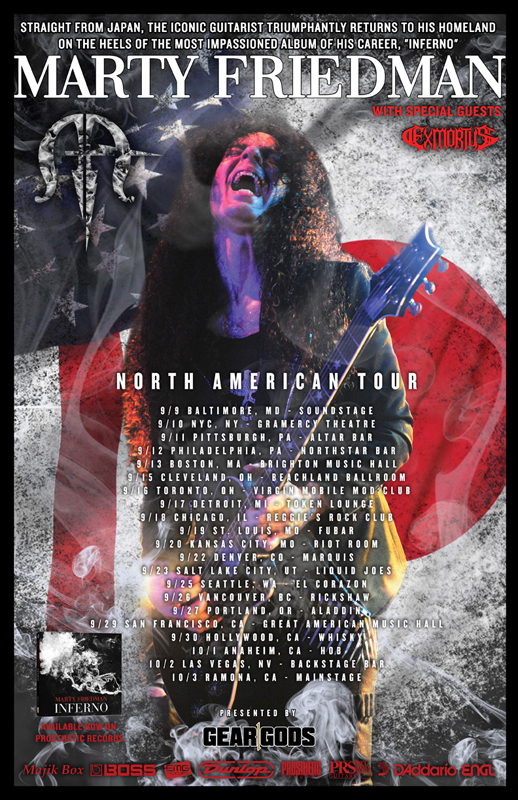 “On the rare occasion that I stop and think I about it, I realize I’ve done an insane thing: I left a successful international band to concentrate my efforts on the domestic music scene of a country thousands of miles from my home. Different culture, different language, different planet. Since I went to Japan, so many Americans have supported me, and while many doubted I would ever play live in my homeland again, now it’s happening. Choosing the setlist and doing prep for this tour has been a blast. Words can not describe how excited I am about finally touring North America!”

We here at Metal Riot could not be more stoked for Marty to stop down in the States and spank the new school pups with his insane chops. My favorite Megadeth guitarist ever, for sure. And Exmortus as well are along for the ride! 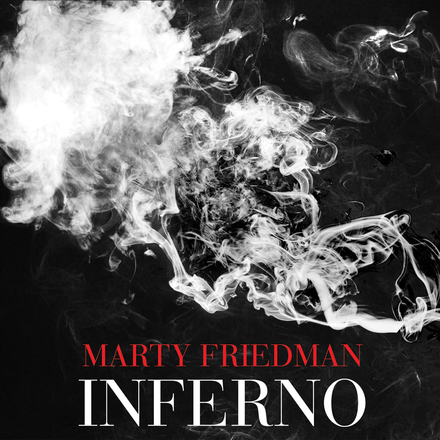 Globally-renowned guitarist MARTY FRIEDMAN is gearing up for the next leg of his “Inferno” world tour – an extensive jaunt throughout Brazil starting next Friday to support the March 6 domestic release of his acclaimed, Billboard-charting solo release. Altogether, FRIEDMAN will visit 19 Brazilian cities throughout March, followed by stops in Chile and Argentina. Full dates can be found below. 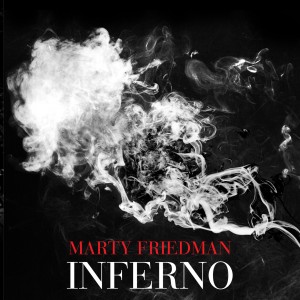 MARTY FRIEDMAN kicks off the week with the premiere of “Sociopaths,” a brand new track from his highly anticipated new solo album “Inferno”! A lyric video for the track — which features David Davidson (Revocation) on vocals, bass and rhythm guitar — can be seen below. 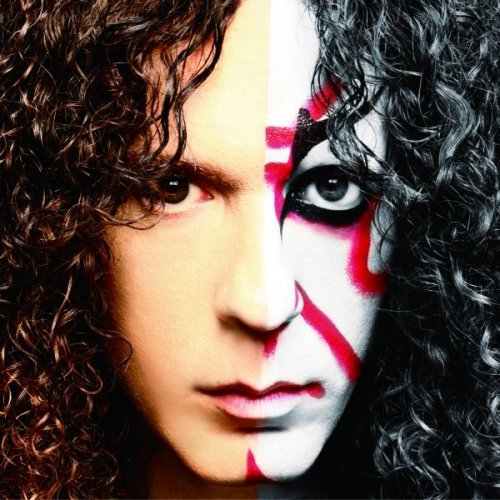 Marty Friedman (of Cacophony and Megadeth fame) has always had an interesting story. Post-Megadeth years found the celebrated guitarist moving to Japan, releasing numerous acclaimed solo albums and becoming a television star! Always one to follow his muse over the cliché or easy path, Marty is an icon to the metal world.

The great Prosthetic Records has reissued three fantastic Friedman albums for North American consumption! 2010’s “Bad DNA” and 2008’s “Future Addict” have only been available in Japan until now, streamlined and electric collections of Marty tearing it up in his forward thinking, signature style. In addition, perhaps Marty’s best album “Loudspeaker” from 2006 is also getting a sweet reissue treatment.

I was very honored to talk to Marty about Prosthetic, his surreal life in Japan, his favorite Megadeth solo, Billy Sheehan and donating all his Megadeth guitars for tsunami relief. What a class act!