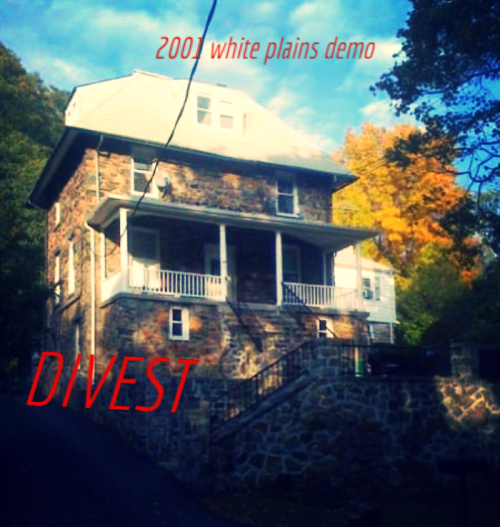 For the couple thousand kids who give a shit and know about my quite unsung old post-hardcore/nu metal band DIVEST , here’s a treat. Our one time very brief live bassist Andre Malkine shot me a copy of three songs I didn’t have that I added to our growing Bandcamp discography.

This was around a time period in early 00’s when we all kind of congregated at this party house around Purchase College cuz our guitarist Dave Parker was going to school there. It turns out the house was also where incidentally mine and my sister Cambria’s mom (who grew up in White Plains as my Grandpa was a famous minister there) used to come get babysat as a child decades earlier! So crazy. Swear to God. Weird synchronicity.

The house on the cover is not where we recorded this demo, but was the band house where everyone lived for a year or so and we did many mixes there of different tunes. The actual demo was done at some dudes house in a ritzy area of Westchester.

Funny story from this time. I remember our drummer Zac Shaw (now of Dead Unicorn) went outside after drum takes and smoked a bowl. He was happy and standing under a tree when a fucking squirrel fetus fell out of the tree and slid down his face. Worst. Buzz Kill. EVER. Thankfully this 3 song has some of Nate Kelley’s best…BASS playing!!

This is what I wrote about it on Facebook:

OK ‪#‎tbt‬ big time. thanks to Andre Malkine for shooting me these. 3 demo tracks from pre 9/11 (a few months) 2001 Divest with Nate Kelley, Dave Parker (ex-Weerd Science, Coheed and Cambria, current Stellar Young) , Kurt Brown and Zac Shaw line up plus myself. Drums sound very shitty (not performance), but the songs rule. Some of my best lyrics.”Valley” grooves so fuckin’ hard . I remember we’d play that and I’d feel like could knock down walls by staring at them during the verse riff. Never felt such false sense of invincibility in my life (and that says a lot if you know my life story) as this amazing, complex time drinking 40’s and rockin out toSevendust, HUM and Jonah Matranga;s FAR with the boys while writing new songs constantly. This led up to us going to APPLEHEAD RECORDING & PRODUCTION and re-recording “Valley” wth Dr Know of Bad Brains, before we did the full Ghost Town Reckoning album with Dr Know and Applehead Studios (Chiodos, Team Sleep, Coheed ) guys producing. Crazy stuff. I wish I had the Applehead version of “Valley”. Also, “We Can Live” is the most desperate and confessional tune I probably ever wrote for a gal.

For all the fighting and bickering between us and the Coheed guys and band member trades and revolving crap/ all kinds of drunken bullshit with them, there is a lot of great music and MANY GOOD TIMES in the wake of all these people affiliated with the certain group of bands that came out of the Hudson Valley area around then like us, Coheed, Three, Watch You Burn, Anadivine,  etc. Much love and respect and hopeful peace and harmony for the rest of our pathetic lives! Best lyric: “A dirty business so let’s stick to our friends”.

This was a weird space between Nu Metal and melodic post hardcore that we’d keep worrying at like a problem for the ages. haha.” 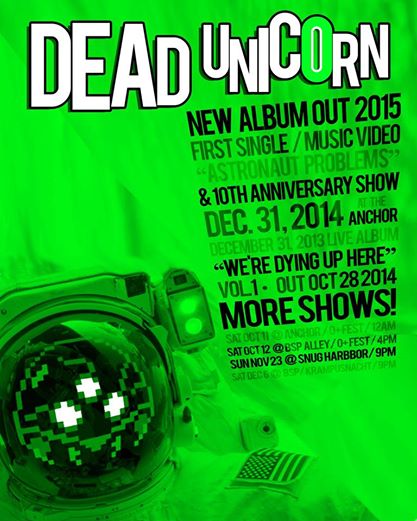 Dead Unicorn , the indie-core sludge metal duo of growing notoriety, have  released the above image and the following statement:

We have been a band for ten years. Holy Shit. thanks…

Congrats to homies Paul and Zac on a decade of this project and forward thinking, funny times. 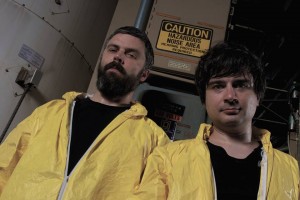 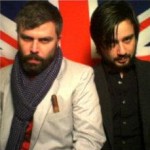 I don’t know what to make of this photo of Dead Unicorn in front of the Union Jack. It stinks of propaganda.

ANYWAY…I don’t trust these guys anymore. But they seem to be keen on keeping track of codes like Orange and Red and stuff like that which threatens the human race.