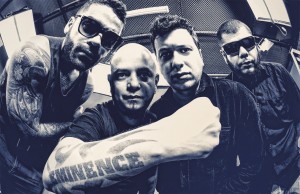 Do sub-genres really matter anymore or should people just listen? Take a band like Nhor who are more abstract and create kind of dark moodscapes or a band like Devildriver who just want to groove and kill while tweaking their sound slightly each record or a band like Spineshank who never really worried about what style they were playing. It is all good. There is room for anything. Metal is about freedom, ideally.

Eminence from Brazil take this to heart on their new record THE STALKER. The album, produced by Tue Madsen (Himsa, Dagoba, Aborted), is full of groove, thrash and danger around every turn. With ferocious vocals from Bruno Paraguay, a lockstep rhythm section and the guided missile guitar approach of Alan Wallace, the band are set to make a mark, like Sepultura and Krisiun before them, on a larger global scale.

From the ominous opening of “Self Rejection” to the Fear Factory-esque assault groove of “Eyetricity”, Eminence rain body blows on the listener. Stream the whole album (featuring guest spots from Paulo, Jr. of Sep fame) HERE.
It was a pleasure to interview guitarist Alan Wallace and Metal Riot hope to do our share and  to help promote the band stateside. Read the interview HERE!