Interview: Slaves BC – When Every Breath Matters 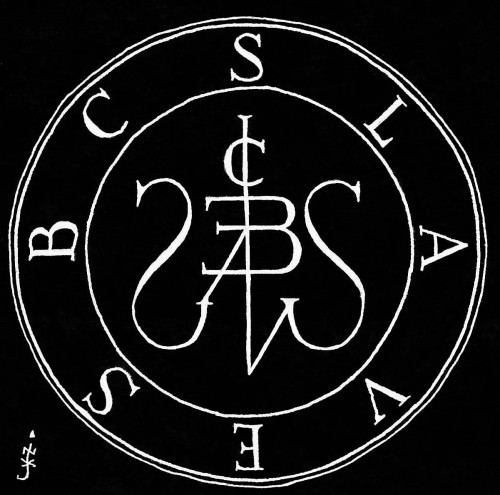 “…One is a bad wolf who is filled with hate, rage, envy, and so on. The other, is a good wolf filled with love, peace, humility, and such. The boy asks which will win the war, and the grandfather replies “The wolf you feed”.

Drummer/vocalist Josh Thieler of Pittsburgh’s Slaves BC took the time to answer our questions and consider the most pressing issues of our modern times. Also, they have a new split 12″ and a bad ass sigil that Jinx of Coven made them.

French black metal/chaotic hardcore outfit PLEBEIAN GRANDSTAND will be heading out on a full US tour August 4th – August 25th with Reproacher. The very awesome tour will support their recently released second full-length, Lowgazers, which came out a few weeks ago via Throatruiner Records. Order (2xLP/CD), stream and download Lowgazers for free at this location.

I am super amped up for this tour and have to try and make a date. Their new Music video for “Thrvst” is completely frightening, a seizure-like summary of modern disorientation amidst chaos. Music video directed by Adrien Broué. Recorded and mixed in January 2014 by Amaury Sauvé at ‘La Senelle’ studio.Watch it HERE and check the tour dates as well.

Watch the music video for “Thrvst“ at this location.

Four years after How Hate Is Hard To Define and a pair of splits, here’s the long-awaited second full-length from Toulouse, France’s PLEBEIAN GRANDSTAND. Lowgazers  marks another impressive step in the band’s quest of total aural devastation : armed with new drummer Ivo (Stuntman, PAL…), the four-piece picks the most dissonant and experimental aspects of black metal, hardcore and sludge to create an unreal vortex of desolation.
From the first notes of “Thrvst“, the band reaches new heights of intensity, switching from inhuman blast beats to slow-motion torture, while unorthodox guitar work and painfully shrieked vocals tear the listener from all quarters. Recorded and mixed by Amaury Sauvé (Birds In Row, Calvaiire, Death Engine…) then mastered at New Alliance East (Converge, Gaza, Xasthur), Lowgazers‘s sounds commensurate to the band’s vision, being a ruthless demonstration of power as well as an untouchable pinnacle in extreme music hybridization.