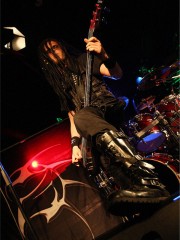 “The band really hit it of well with Max on our last European tour. He’s just a badass friend and a really talented young player. We hope to get some awesome stuff set up with him in the nearest future.”

The newly appointed bassist commented on his new permanent gig:

“It feels great being in this band, it’s a band with both great music and great people in it which can be almost hard to find these days and in this town. Also the experience of being on my first tour ever with them was amazing, I’m looking forward to many future years as the bassist of Zonaria!”

“Caleb has been a great friend of mine for quite some time. And while recording our third cd Simon felt like he wanted to focus on the singing. So from now on Simon will only handle the vocals and Caleb has stepped in as our new guitarist. He’s an amazing guitarist and has a fantastic view on music and guitar playing.”

Caleb comments on joining the band:

“It’s fantastic to be out on the road with Zonaria. I’ve always been a fan of death metal music, especially death metal music from Sweden, so playing with what I would consider to be one of the best modern Swedish death metal bands is both a pleasure and an honor. People should most definitely expect some major things coming from Zonaria in the very near future.”