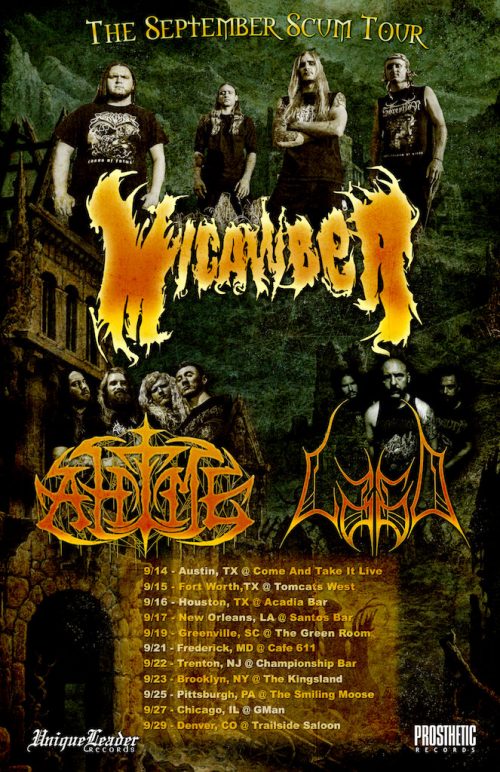 Kansas City based tech sickos AHTME and Phoenix, Az’s monolithic death metal titans LAGO have announced that they will be touring alongside headliner Micawber in September as part of “The September Scum Tour”. The tour will run from September 14 – 29 and hit a large chunk of the east coast, midwest, and Texas.

LAGO will be touring in support of their devastating new album Sea Of Duress which is available physically HERE and digitally HERE.

LAGO premiere “Soiled Is The Crown” music video at Metalsucks; Launch Pre-Orders for “Sea Of Duress” 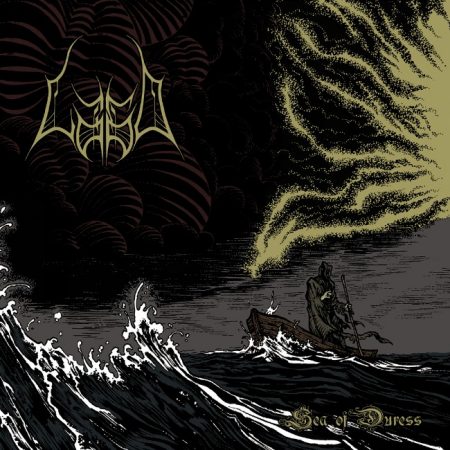 Phoenix, Az based critically acclaimed death metal group LAGO have premiered a Matti Way (From the North Films) directed music video for their song “Soiled Is The Crown” today via Metalsucks. The track, which saw Metalsucks commenting “If you like your DM with guts churned, ear drums rattled and knees shaken, this is the stuff for you!”, comes from their highly anticipated Unique Leader debut Sea of Duress which will see a June 8th release date and sees the band further refining their blackened, menacing brand of old school influenced death metal.

LAGO commented on the video, “This was our first experience making a video, so we were VERY apprehensive about the idea.  We tend to have a mentality of “less is more” in terms of our artistic direction, so the fear of doing something over the top and ridiculous was definitely there. This video is honestly the brain child of Matti Way.  We had a really simple idea and he really took it and ran. We were thrilled with how it turned out. The textures, the graininess, the cuts and especially the lighting turned out incredible! This video really encompasses the tone of the whole album in our opinion.” Matti Way added, “So what I wanted to do with the video was really bring out Lago’s eerie and ominous musical vibes that are interwoven throughout Sea of Duress…”

Watch the video for “Soiled Is The Crown” HERE.

Physical Pre-orders for Sea Of Duress can be found AT THIS LOCATION. 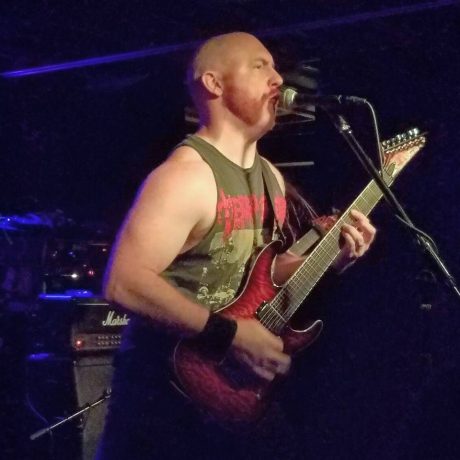 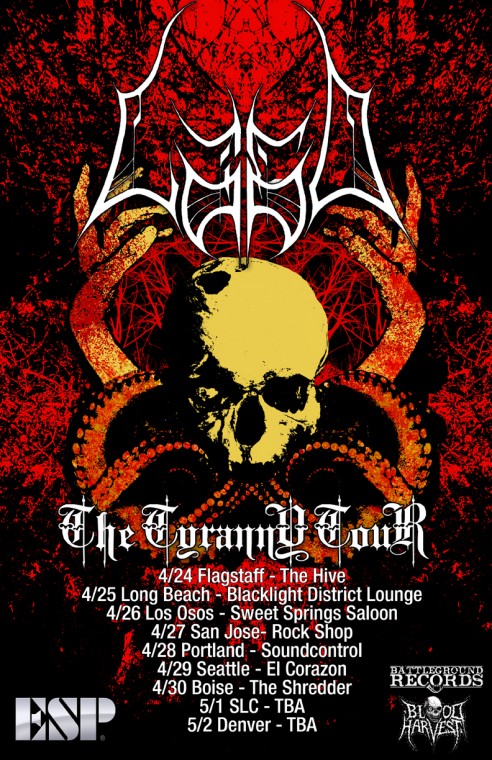 The band’s recent ferocious Tyranny (see our interview on the album HERE) will see its vinyl debut on March 16th, with 100 copies on blood red and 200 on standard black vinyl. In addition, LAGO also just secured an ESP guitar endorsement, only solidifying the band’s deadly capabilities even more. I’d also like to say that Cole from the band is a stand up dude and extend thanks to him for his kind condolences when my father recently passed away.

Pre Order info for Tyranny and full list of dates BELOW! 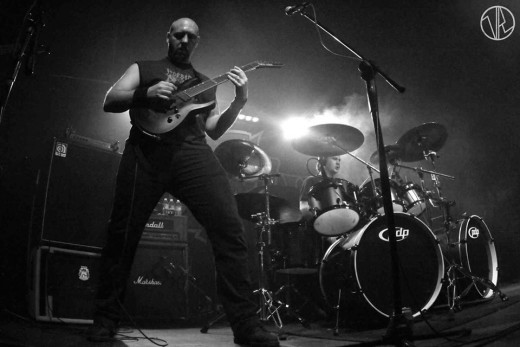 I want our songs to grip people that listen to them. I want the kid standing in front of the
stage to be pumped up and head bang. I think even in the dark world of metal there is a positive side. Wanting someone to
just get a release out of what you’re doing, and wanting someone to enjoy your music is a positive force for sure. – Cole Jacobsen

Kind of not into the more overtly technical trends or Sumerian-core influenced styles that have been going on latey? That’s your perogative, for sure.If you don’t find something to make you rage when you hear Arizona firebrand’s Lago’s Tyranny however, you just plain don’t love real death metal.

Delivered with a grand darkness, the album pulls a cloud over you like a stage curtain dropping, but under the veil is a world you will become addicted to. In the end, it is an empowering record that makes you want to confront the tyranny around you, when lies won’t cut it anymore. A wise man once said ,” It’s what people know about themselves inside that makes ’em afraid.”

Lago on a more direct level just plain kick ass and make you want to bang your head, howl at the sky or grip invisibles oranges in an insane/inane manner. The few rough patches are minor in the scheme of their recordings and honestly lend it a more human essence that makes it rule more.It’s a perfect blend of classic death metal influences with blackened edges and just enough technicality to not be mere re-hash. Drawing from stuff as divergent as Metallica and Behemoth to their own inner landscapes, the Lago boys are blazing a powerful trail into the black.

For more read BELOW.