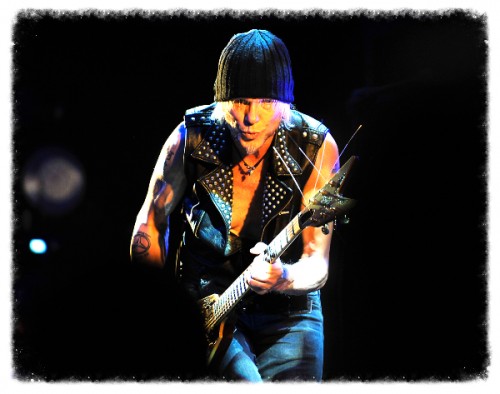 Classic rock fans will thrill at the news that guitar whiz Michael Schenker of MSG, UFO and Scorpions renown, will bring his Temple Of Rock line up on tour this Spring in North America! In support of new album Spirit On A Mission, to be released March 24, 2015.

Michael Schenker’s Temple of Rock line-up proves to be one of the strongest that the German guitarist has ever played with, as it features the former Scorpions “Rock You Like A Hurricane” rhythm section of Francis Buchholz (bass) and Herman Rarebell (drums), as well as Doogie White (vocals, formerly of Rainbow), and Wayne Findlay (guitar/keyboards, and longtime Michael Schenker Group member).

The tour kicks off on March 25th at the Rockbar Theater in San Jose, CA (the day after the release of ‘Spirit on a Mission’), and wraps up on May 2nd at the Canyon Club in Agoura Hills, CA (with special guest Don Dokken on the bill). In between, the tour will go coast to coast, including a performance at the Gramercy Theatre in NYC on April 15th.

“Promotion is definitely the next step,” says Schenker of hitting the road in support of Spirit On A Mission. “Wherever we are needed around the world, we will be there to promote Spirit On A Mission. I want to make Temple of Rock its own entity. Right now it is still using the Michael Schenker platform but eventually I want it to stand on its own feet as Temple of Rock.” To get a taste of the new line-up, view the video for the tune “Vigilante Man” HERE.

For tour dates see BELOW and keep the rock alive! Don’t believe them when they say rock is dead. It is up to us all!