From one extreme music fan to all you readers out there, indie noise progenitors Lightning Bolt are more energetic and crazed than most melodeath or hardcore bands you’ll ever see. From erasing the boundaries between band and audience to 20 years of hyper rhythmic mania to their latest crunker Fantasy Empire, Lightning Bolt have kept the train rolling all night long. Tour kicks off tomorrow in Buffalo, NY

METZ and Liturgy are tour mates on this trek, albeit at different dates. If you’re so entrenched in your stinky Florida death metal ways to dismiss this as hipster music, I kinda feel bad for you but will be too busy enjoying the innovation of these acts. 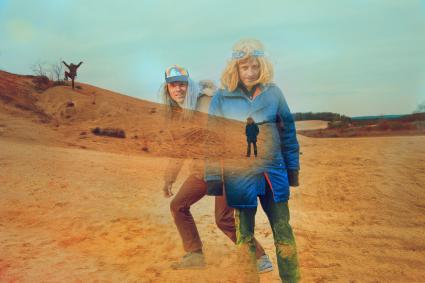 Noise champs Lightning Bolt have defied the odds for almost twenty years, creating their own quite real “Fantasy Empire” of unshackled by tepid mortal limitations manic rock music in the process. The newest record Fantasy Empire is their best sounding album fidelity wise, the Rhode Island band tracking in a whole new and more traditional way but yielding psychotic, spastically rhythmic and trippy, brilliant results on songs like “Dream Genie” (not Bowie cover) or “King of My World”. The two Brians (Chippendale and Gibson) of the duo  are back after six years between albums but haven’t lost any of their chutzpah on this sixth album in a critically acclaimed + pioneering career featuring many careening flights of fancy.

Fantasy Empire will be released March 24th, 2015 via Thrill Jockey. In addition to standard formats, Thrill Jockey is offering a limited pressing of 300 deluxe double LP versions on black-and-white swirl vinyl. Preorder packages are available at THIS LOCATION.

For an interview with Brian Chippendale see BELOW.