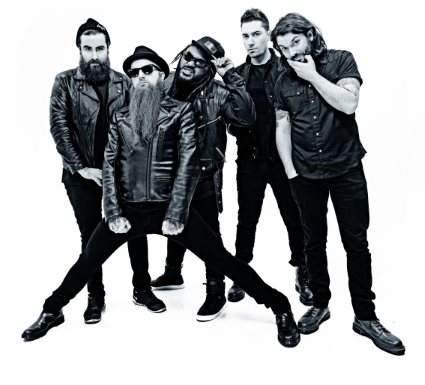 I think a lot of people are lazy & happy to sit back. There wasn’t such a
thing as a Laissez-faire attitude when we were cavemen. We have to be more
proactive as a society. – Mikey Demus

Skindred have always had their own thing goin’ on, an unstoppable mash of reggae, punk, metal, dancehall and anarchy. The band slay almost every band I an think of live. You can literally throw them on almost any bill and even if someone wasn’t a fan of the style they would be hard pressed to not admit the band kicked their ass and gave 100%.

Volume is the latest from the hard working group, via Napalm Records, and Mikey Demus (guitars) fills us in on the latest Skindred molotov cocktail lobbed into the ears of the complacent BELOW.