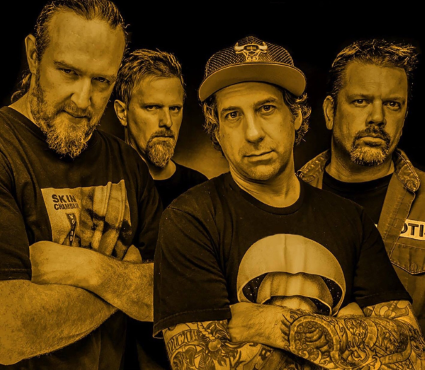 The first time I heard Drug Honkey was almost a decade ago now! It stuck out from a pile of boring emo-goth promo cds like a cancerous growth – Death Dub. ‘WTF is this?’, I thought. I took the cdr home from my then editor’s apartment and soon was lost in a swirl of cacophony and acidic rage amidst a Scorn-like clatter of urban blight and very cool, weird atmosphere. The vocals sounded like they were sung by a demon punching up through concrete but the music was both smothering and spacious. Fuck yeah!

I remember thinking how cool it was that there were still some underground bands who took the lessons of Godflesh to heart that you can do something outside the template of what is standard metal and add some punk freedom into the recipe to create a unique experience. This was a nightmarish but addictive sound and perfect with a spliff for those already halfway into an existential crisis who figure, ‘Fuck it, let’s go full bore.’

Cue 2017 and the band are still around and getting better reviews, and deservedly so, than ever for new album Cloak Of Skies on the label Transcending Obscurity. Cloak of Skies boasts seven tracks, including a remix by the legendary Justin K. Broadrick (Godflesh, Jesu) and a guest saxophone feature from Bruce Lamont (Yakuza, Corrections House, Brain Tentacles). Cover art was hand-painted by renowned artist Paulo Girardi (Inquisition, Power Trip).

Let’s catch up with Paul Gillis and learn more about this current era of a long running project who do things their own way! Read it BELOW.