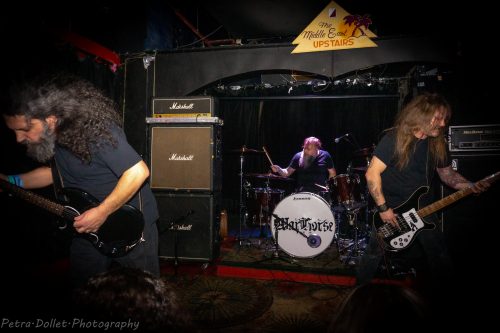 Doom dealers Warhorse reared their handsome heads to make a very special appearance at the legendary Middle East in Cambridge, MA on January 16th. Hell Bent and Ritual Blade were also part of the riff ritual and we are pleased to offer you good folks some photographic evidence courtesy of Petra Dollet. Check out the gallery of this awesome night below. 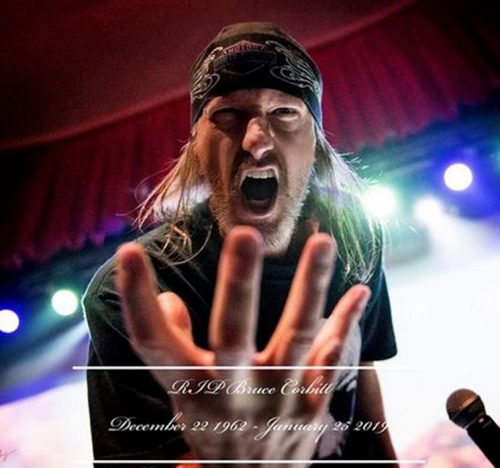 As the metal community still reels from the sad turn of cancer events leading to the loss of Bruce Corbitt, a memorial has been announced for the Rigor Mortis/Warbeast hero.

Reads the public memorial page, “We will come together to celebrate and remember a great man who touched the hearts of so many people in this world. We will show our love and support for his wife Jeanna, his daughter Chyna, his stepson Lyric, and BRUCE‘s amazing mother Glenda. We will celebrate in the most beautiful way possible by honoring BRUCE‘s final wishes to make his memorial just the way he wanted it. Additional details on special presentations, guest musicians, and other surprises are still being worked out. Stay tuned and You Know Damn Well!”
BRUCE CORBITT Public Memorial:

MCs:
Debbie Sexxton of 97.1 KEGL
“Thrashin” Alan of KNON Hardtime RadioEulogies by:
Scott Shelby
Thrashin’ Alan
Casey Orr
Harden Harrison
CORBITT played what he thought would be his final show with Warbeast — a special set at the annual Fort Worth Weekly Music Awards Ceremony where the band was inducted into the 2018 Fort Worth Music Hall Of Fame — last July, at the time noting, “I’m really excited and thankful to the Fort Worth Weekly for showing us this much appreciation. I’m proud that I’m even feeling good enough right now to be able to attempt it. But I do know my limitations and I will be careful. All I know is I get to experience that feeling of being on stage again… and that’s why I keep on fighting. Because good things do finally happen if you can just hang in there long enough. You know damn well!”
Anselmo gave a warm tribute speech and performance at a show with The Illegals for Bruce the day he died that you can see HERE. Regardless of if you are in a camp that forgives Phil or not for the Dimebash incident, I hope we can all agree this was a terrible loss for everyone and that this was the right thing to do for Bruce and cool of Phil and his band who lost a real friend.
Add to My Radar

Bruce Corbitt of Warbeast/Rigor Mortis fame has lost his battle with cancer. Condolences to  Jeanna Corbitt and all his fans. What a cool, strong, underground legend of a human being. Hope he is already jamming out with Scaccia. Read more at Exclaim! HERE. 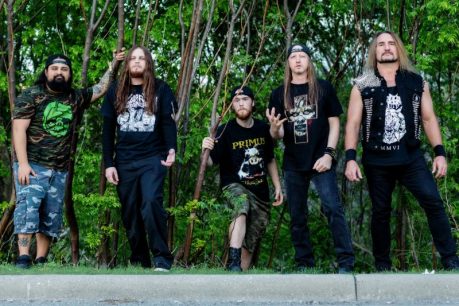 Warbeast  feature some of Bruce Corbitt’s fiercest vocals to date on new album Enter The Arena. There is almost no way as a serious metal fanatic to hear “Maze Of The Minotaur” and not go wild from the lightning assault of guitar and hammering rhythms paired with Corbitt’s gnarly and commanding proclamations.

Today, Metal Injection unveils the official video clip for a song called “Hitchhiker”. The tune, delivered as an eighteen-minute horror movie, is based on Edwin Neal’s character in the original Texas Chain Saw Massacre.
Elaborates vocalist Bruce Corbitt, “I’ve actually had this idea of using Ed Neal for a music video for a long time. So after we knew for sure that we were going to include a song called ‘Hitchhiker’ on the new WARBEAST album, the timing was right to make this old idea become a new reality. The lyrics for the song are based on Ed’s character from the original Texas Chain Saw Massacre. But this short film/music video is not related to that movie plot in any way. This is really just a silly script and a band having fun working on our final project together. Ed was a complete professional and great to work with and we are excited to have him starring in this. But like I said, this film isn’t to be taken serious I hope you have as much fun watching it as we had making it. Thanks to Michael Huebner and 12 Pound Productions for doing a great job filming and editing this video. I also got to give a shout-out to Lee Russell and Gas Monkey Live for allowing us to film the music portion of this film there.”
View “Hitchhiker,” courtesy of Metal Injection, at THIS LOCATION. 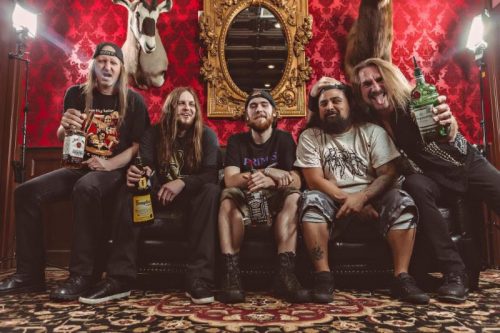 Texas thrashers Warbeast are streaming their latest song “Maze of the Minotaur” over at Decibel.

“Maze of the Minotaur” comes off of Warbeast’s upcoming album Enter The Arena due out August 4 via Housecore Records.

“I wanted write in a different mode than we normally do; some more mid-paced and slower breakdowns mixed with thrash,” relays guitarist Scott Shelby of the track. “So this happened to really stand out as a notable song. I’m also proud to break out my version of Tony Iommi leads from the Born Again era on this track. Then of course I gave it to [vocalist] Bruce [Corbitt] and he roped it off with the crazy story of the ‘Maze Of The Minotaur.'”

“My favorite subjects to write about are obviously about horror, psychos, medieval times, and Greek mythology,” Corbitt adds. “I’ve wanted to write a song about the Minotaur for years [In Greek mythology, the Minotaur was a creature with the head of a bull and the body of a man]. As soon as I heard the music Shelby came up with, I knew this was the one to capture the atmosphere. The chorus part of the music pretty much spoke to me and I could hear it actually saying the lyrics. That’s when you know it’s going to be a special song.”

Corbitt was recently diagnosed with esophageal cancer. The disease is treatable though rarely curable. Corbitt is currently undergoing an intensive schedule of radiation treatments and played his final show on May 27.

Comments Anselmo, “In light of the complicated situations surrounding Bruce Corbitt, lead vocalist for Rigor Mortis and Warbeast, respectively, most of us sisters and brothers in the heavy metal community are very aware of, I’d like to extend an enormous amount of just-praise upon him. Since the late 1980s to the present, Bruce has always been a person to count on as a friend, and an excellent man to work closely with. Our love of music brought us together and created an unbreakable bond, and that is a priceless cornerstone that can’t be ignored when examining one’s life in hindsight. Bruce has always shot me straight, given me life advice, and from my perspective, has always been there for anyone and everyone in need, for a myriad of unselfish reasons. I thank all that’s good out there I had the chance to be a part of the four Warbeast releases, and I feel Bruce’s best is on their latest record, Into The Arena. He’s a warrior, a fighter, and best of all, for the better of the genre, one of the most recognized voices in all of heavy metal. Well done, Big Brother.”

You can donate to Bruce Corbitt’s Medical Expenses Fund here.

You can listen to “Maze of the Minotaur” via Decibel and check out Bruce Corbitt Benefit Shows here.