Up From The Grave: DREADLORDS’ “Reapers” roasts the beating, dark heart of the USA 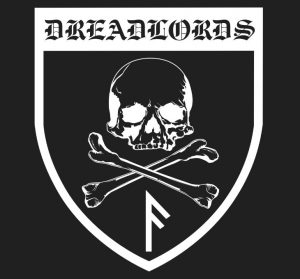 I found an old journal last night from about fifteen years ago and tore out a page in which I’d scribbled that ,“Life is like passing through a fogging yolk and maybe breaking loose into a heaven, but no guarantee?” Dreadlords, an experimental group from Upper Black Eddy, Pennsylvania who feature members of industrial flirting ritual occult act T.O.M.B. , seem to be searching out their own meaning to creation and our human experience navigating the perils of darkness and light’s perpetual tug of war with the soul. I’ve mainly been listening to them, Nate Hall’s lonely latest and the ethereal darkness of Lisa Cuthbert’s HEX TAPES the last few days and finding a lot of comfort in both during some quite shitty personal struggles.

In the garish glare of American mainstream culture, one could quickly be forgiven for wanting to pare things down to something more gritty, personal and close to the Earth. Blues, metal, gospel and – to my generally ringing ears, anyway – even some No Wave bordering punk influences combine with growling oral traditions and lonely campfire ritual soul-bearing to create a unique sound on the group’s 2017 release REAPERS.

Honestly, I ate a pot brownie and listened to this thing just last night out in the middle of the woods with a creative cohort, such is the return investment on these songs. It is taking the sort of wallop of the much more linear stoner rock band Lo-Pan’s “Marathon Man” to smack me back to reality this morning from my brain’s wanderings out on the edges of a REAPERS night time dream which transcends realms and archetypes like the musical equivalent of King and Straub’s The Talisman. If anyone wants to bring some strong black coffee and some hugs and kisses to where I am de-fogging in bed, that would also be appreciated.

But yes,  Zimimay, Samantha Viola and J. Gannon made a not too modest dent on the underground’s psyche with the uncompromising black psych blues release Death Angel , which featured some potent declarations of intent via the likes of “Dreadlords Cometh” and “Thieves Of Faith”. REAPERS expands the scope the mysterious act’s rising Mojo, personalizing the experience even further with a deep dive into the soul’s longings and laments.