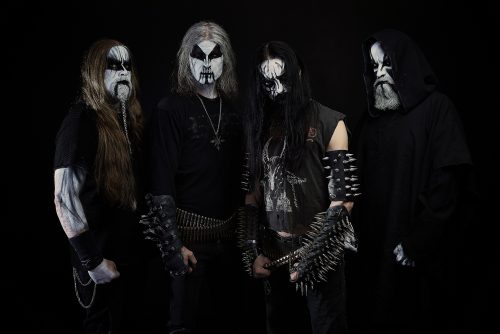 Norwegian black metal formation 1349 have announced a small run of headlining U.S. dates, in which they will be supported by PULCHRA MORTE. The band will hit four U.S. cities this May, including Dark Lord Day Festival in Munster, IN; all dates can be found below. Tickets are on sale now!

1349 will be supporting their latest release, The Infernal Pathway,’which was released in October 2019 and can be ordered HERE. 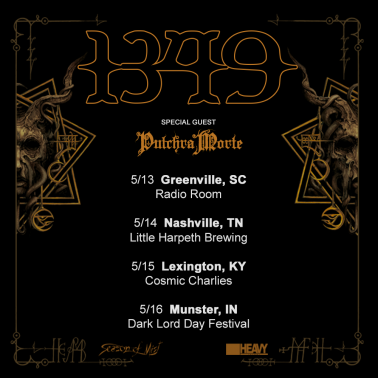 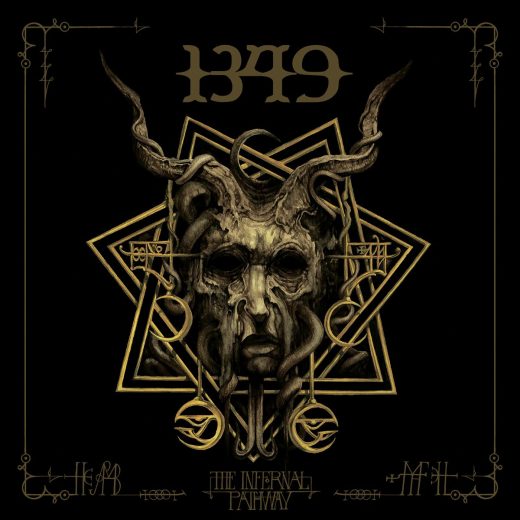 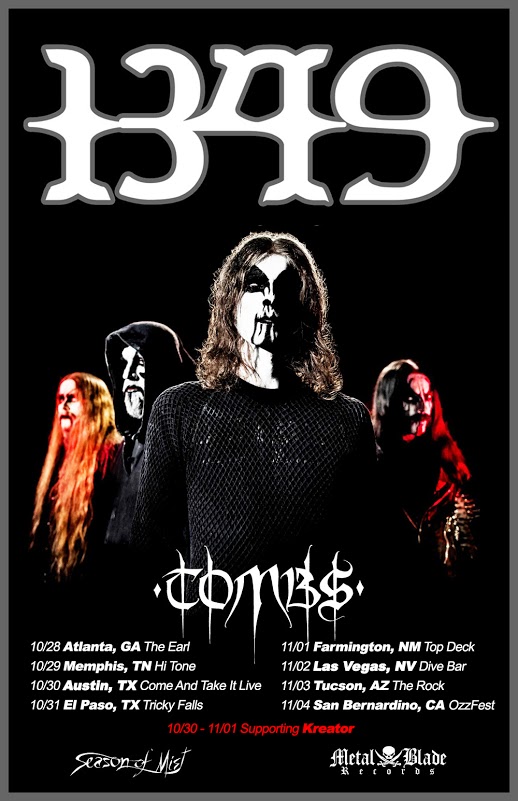 I was just reading an email with 36 Crazyfists publicist when I saw a new message that esteemed black metal legion 1349, in my opinion one of the top 10 black metal bands in the world as far as consistent quality goes, are touring the US. What does one have to do with the other? Nothing except they are next to one another in my iTunes, so that is an odd coincidence. Though not as odd as the time former Coheed bassist Mic Todd and I sang karaoke years ago and he sang ‘Alison’ and I sang ‘Suspicious Minds’ and then months later when I saw Elvis Costello (this was like ten years ago or more) Elvis combined those two songs in his Central Park set into a medley! I had no idea he did that sometimes and it hella tripped me out. Anyway, tangent…bear with me. Drinking a Guinness Extra Stout lunch and blasting 1349’s lightning fast brain scouring “Slaves” as I try and type meaningful sentences for other  humans to consume.

Ok, 1349 are fucking touring in the United States. Hopefully they will bring the black plague along and wipe out all the idiots who don’t believe in global warming, though if 1349 did this it is doubtless some mega church people would just see it as the work of the devil. Whatever, just get it done!

1349 have announced U.S. dates surrounding this year’s Ozzfest (they are def the most extreme band playing). 1349 will tour the South supported by TOMBS for a very cool and slightly disparate pairing. Additionally, the band will play as main support to KREATOR on select dates! How anyone will not have their head ripped clean off by the sheer speed of Kreator and 1349, at times both two of the fastest bands on the planet, is beyond me. That is going to kick major goat butt. 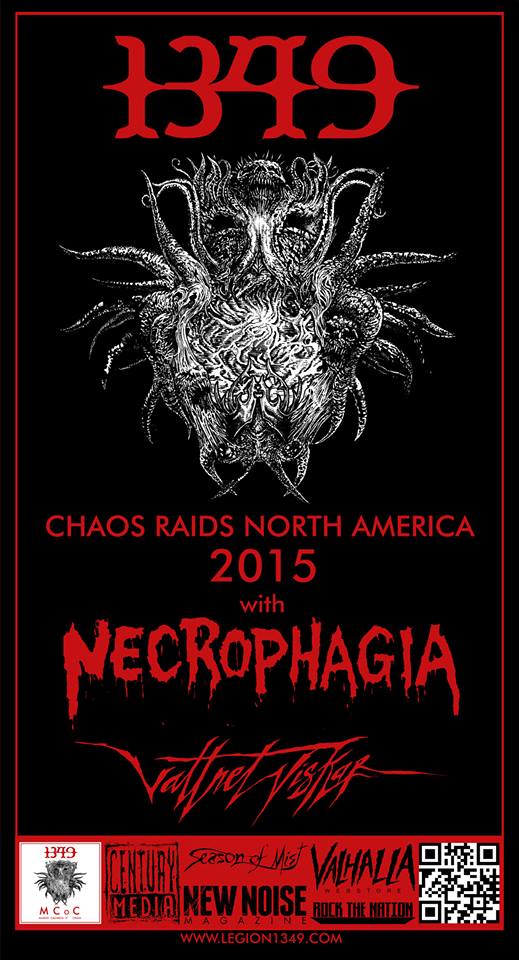 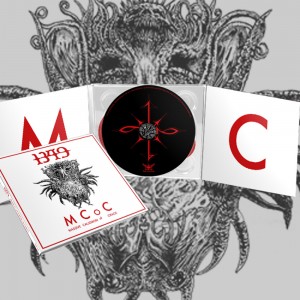 Norwegian black metal tyrants 1349 have premiered their new video for “Slaves”. “Slaves” is the lead track from the bands forthcoming new album Massive Cauldron of Chaos.

Massive Cauldron of Chaos will be released in North America on September 30, and will be available across multiple CD, vinyl, and cassette formats. Pre-orders are available here.

Click HERE if you can handle being dropped head first into the cauldron. The thundering intro, subterranean imagery and ferocious drumming ritually wed to dire vocals and near perfect guitar tones is one of the undisputed best black metal voyages of 2014.  This WILL tear your soul out of your face holes. of particular note is the 2:06 mark, a stirring and gloomy onslaught into dark osmosis. 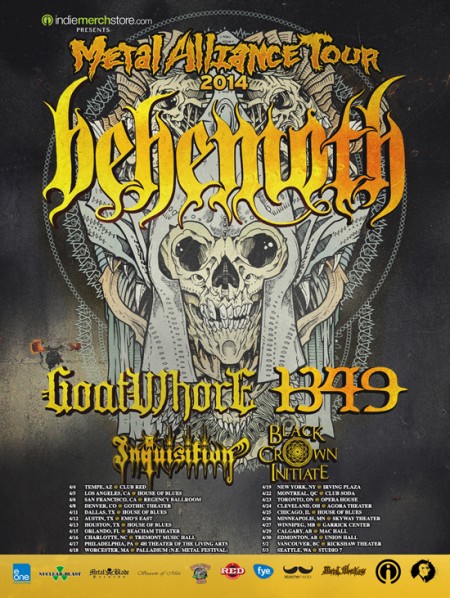 The Metal Alliance Tour is hitting the road for it’s fourth annual bout of extreme metal.

The most exciting part of the Metal Alliance Tour here on North American soil will be the presence of Behemoth!

Norwegian black metal act 1349 have just released a performance music video for the song “When I Was Flesh” from their 2010 Indie Recordings release Demonoir.  The video was filmed at the Rockefeller Musichall in Oslo, Norway September 10th 2011. 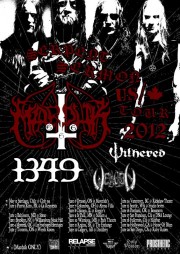 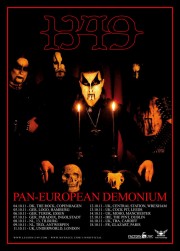 Norwegian black metal act, 1349, have cancelled their continental European tour dates, however they will still be playing in the British Isles. The band has issued this statement about the tour:

“1349 are sorry to announce that the rest of the shows on our planned tour in Europe will not happen this time around. We have instead started preparations in order to set up a full tour in Europe bound to happen this coming spring.

Sad as we are about having to wait before we can tour continental Europe, we’re eager to play and now getting ready for a full blown assault on the British islands.

We will keep you posted about this and other issues on our website; updates and messages are to be issued more frequently from now on.”

The band’s most current release is “Demonoir,” was was released in April 2010 through Indie Recordings.

This coming October 1349 will bring their aural hellfire to six countries. The black metal band released their last album “Demonoir” last year via Indie Recordings, and will now hit the road through Europe in support of it.

The band said of the tour, name “Pan-European Demonium,” The Bells are chiming! We proudly announce that the first 1349 tour on European soil in many years is to take place in October 2011. After several rounds in the U.S., and following our pinnacle album “Demonoir,” we are finally going to make a tour happen in Europe again. We remember with great fondness the European tour following “Hellfire,” and it’s going to be fabulous and exciting to be back touring our own continent again. Playing “Demonoir” songs live gives us a diabolic boost, and the hunger and ferociousness of 1349 have grown immensely since the last round. The classics from earlier albums will of course not be let out from our live-sets… we set out to make every show on our European tour a sheer feast of black metal ecstasy.

Support is to be announced, but click here to check out tour dates now.

This week’s origin story comes to you from the Norwegian black metal group 1349. Revelation awaits you here.

Show Video: 1349 performing “I am Abomination” live in Montreal

Norwegian black metallers 1349 have recently wrapped up the North American leg of their Weltenbrand tour in support of their newest album “Demonoir.”  The band has posted some live footage of them performing “I am Abomination” at their show in Montreal, Canada.