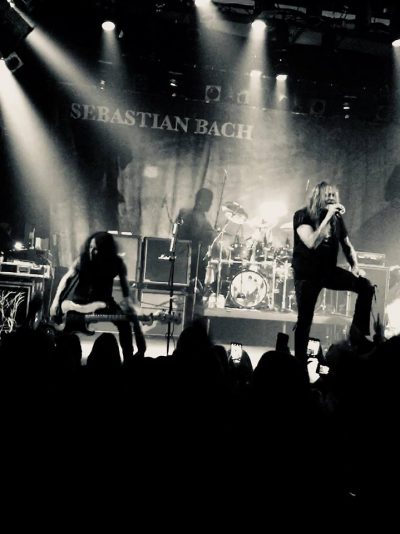 Sebastian Bach‘s Home Away From Home 2018 Tour hit Poughkeepsie, NY like a tornado over the weekend, giving the Sunday night fans their money’s worth and more. The Sebastian Bach band were in excellent form and blew the lid off the venerable venue, one of the best shows of many concerts I have seen there over the last few decades.

From the bass drum bearing Vinnie Paul’s name in large letters as tribute to Bach’s recently departed friend to a number of songs dedicated to him (including a well received “Cemetary Gates” cover!), there was a lot of love put out for the heavy metal drummer’s memory. I was glad Bach could get some of that energy out there because frankly when Vinnie Paul died he seemed more upset than almost anyone and I was worried the dude was gonna go on a major bender from some of his social media posts.

What the Poughkeepsie crowd got was a bunch of cool opening bands and a razor sharp set from Bach and his band, plus plenty of funny stage banter to keep the laughter flowing along with the good heavy metal times. Bach joked that he couldn’t do the “Rattlesnake Shake” if he wasn’t in a good mood after delivering an infectiously rowdy version of the tune along with a lot of other Skid Row classics including “Monkey Business” and the enthusiastically bellowed along with anthems “18 & Life” and “I Remember You.” As Bach admitted, it was “pretty rockin’ for a Sunday night”.

“American Metalhead” was perhaps the heaviest song of the night, the song’s stomping groove shaking the walls of the venue. My gf and I rocked out so hard at one point that we knocked a whole bunch of drinks off of a table accidentally, haha.

Bach made plenty of jokes about how he was thanking the fans for hundreds of years of support and funny one liners about being old like that, but his semi-nasal banshee cry cut through the air like a siren as loudly as ever. Truly, it was a really good time and great to see people coming together in the spirit of rock n roll.

Direct support The Standstills from Ontario, Canada kicked ass, a dynamic duo who combined hard rock power with a sort of White Stripes minimalism to super thumpy and clobbering effect. They definitely played their hearts out and their new single “Wild” rocks. Metalfier also held their own, the NYC area hard rock and metal group combining orcish grunts and leers with old school thrash and a fist pumping attitude.

Still, as good as the openers gave it is hard to fully compete with a legend who has been rocking their ass off for several decades to the point where Bach knows how to work a crowd in his sleep. And he was most def wide awake and firing on all cylinders at this concert, so don’t misread my meaning.

Thanks to all the bands for a much needed wild night and check out photos BELOW.