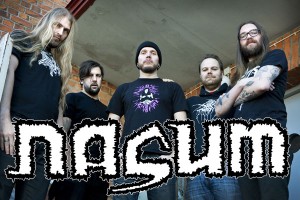 Relapse Records is making my day, from the dreamy swirl of Anatomy Of Habit’s jazzy, existential noise wash “Then Window” track from their 2 song, 40 minute new opus Ciphers + Axioms to the just announced diabolically great news that grind lords Nasum are getting serious vinyl re-issue love. You know your band was good when their sound influenced newer Napalm Death, who once started it all.

Here is the official announcement:

Check out a trailer for the re-issues HERE.

The LPs will be available this December on Relapse.com and will hit stores in January. Buy all four mailorder-exclusive LPs and get a FREE 24″x24″ poster! http://www.relapse.com/nasum-poster-bundle.html

Nasum has announced some additional North American tour dates. Nasum will be touring for their 20th anniversary and will be accompanied by Keijo Niinimaa of the Finnish grindcore band Rotten Sound. Sadly, Nasum’s original frontman Mieszko Talarczyk was killed in the 2004 tsunami.

I never got to see the original Nasum line up but if anybody can do justice to Mieszko’s vocals its Keijo.

The full list of dates so far can be seen here.

In case you didn’t hear, Swedish extreme grindcore masters Nasum are playing a limited amount of cities and festivals in Europe this year to celebrate their 20th anniversary. Well, thankfully they have announced a trip to the U.S. as well.

Swedish grindcore act, Nasum, have announced they will do a few farewell shows in 2012 to commemorate their 20th anniversary. Afterwords the band will retire due to the band losing their guitarist in a tsunami in 2004. The band issued this statement:

“You thought Nasum was dead? We are. This is not resurrection. It’s farewell, for good.”

“If things were different, if Mieszko hadn’t died, Nasum would have celebrated its 20th anniversary in 2012. Therefore, after long deliberation and scrutiny, we have decided that it’s now or never: We will do a handful of shows around the world in 2012 – to celebrate our anniversary, say a final goodbye to the fans and Mieszko. No cheesy reunion, no new albums, no epitaph for Mieszko. We will play only a few places in a limited number of disruptive, unruly concerts. It will be a total blast, and we aim to go out hard. Just you wait.

When Nasum co-founder and lead singer Mieszko Talarczyk died in the devastating and tragic Asian tsunami of 2004, Nasum instantly ceased to exist. As the band’s voice, producer and one of the main songwriters, Mieszko was a vital part of the band’s bloodline. When he passed, all plans for tours and recordings were abruptly stopped. Nasum died when Mieszko died, and the rest of the band members went their separate ways.”

“In the years that passed, the feeling that everything had been left unfinished lingered with the rest of us. Suddenly seven years had passed, and we realized it was time for closure; for us, the band and for the fans. With our anniversary coming up it felt like a perfect time to end the band the way it was supposed to – exploding in a ferocious, blasting frenzy, not wither away at the mercy of tragedy. And finally we are ready, able, and totally fucking charged, so expect something over the top.”

“To handle vocal duties on the upcoming shows we have asked Keijo Niinimaa, vocalist in grind favorites Rotten Sound, to join us. They were always close friends of ours, and while Keijo’s plagued screams won’t replace Mieszko, they will add a certain viciousness to the shows. On a few occasions, we might ask a few other close friends of the band to do some vocal sessions. Who? Wait and see! If you ever wanted to see Nasum blast shit to bits, this is your last and only chance.”

The band’s last album, “Grind Finale,” was released in October 2005 through Relapse Records.