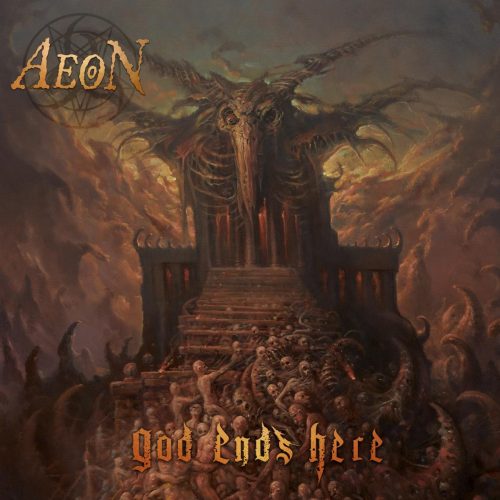 AEON are one of those bands that even Cannibal Corpse dudes will hear and be like ,“Wow, that’s pretty intense, complex and evil”. Get the picture? The band have unfortunately not released jack shit in way too long, but the wait it over! This is a great day!

2021 has proven an insane year for death metal with bands like Obsolete, Cerebral Rot and Bizarre delivering in the realms of avant-garde technical deathy prog thrash, grimy disgusting old school filth death and Lovecraftian punishment, respectively. And then there are plenty of even super techier bands doing a new school thing.

But Aeon are in a class and vibe all their own. Perfectly bridging so many styles while retaining a decidedly older technical enhanced type of feel, “Church Of Horror” is a relentless barrage of evil. You get the feeling after he delivered the twisted sermons on the House Of God album that King Diamond would listen to “Church Of Horror” to climax on the altar with some vile succubus and then cool off using a baptismal font as a makeshift birdbath ball splash/bidet. 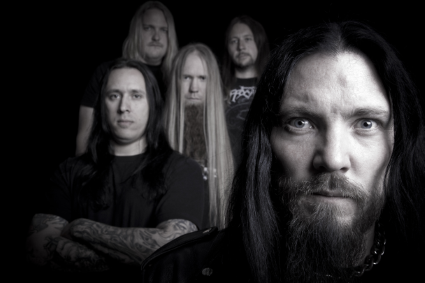 Listening to ball ripper “The Glowing Hate” from 2013 death metal masterpiece Aeons Black, I couldn’t think of a more deserving band than Östersund bad boys  Aeon to serve as support on the huge Cannibal Corpse/Behemoth tour just announced (dates below). The disgusting guitar tones, conceptual art and unique arrangements set Aeon way ahead of most of the pack and they are sure to give every crowd their money’s worth. Tommy Dahlström’s growl is pretty much unmatched. “Fiiiire walk with meeeeee!”

Click HERE for the dates and try not to bleed out of every orifice with excitement. 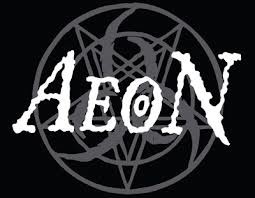 Swedish, the best kind of, death metal band Aeon’s guitarist Daniel Dlimi had announced his departure from the band citing a lack of income as the reason. Dlimi issued the following statement.

“It’s with a heavy heart that i finally have decided to call it quits. Why?!? I simply cant afford doing this no more. To tour with a band in our size, you actually lose money on each and every tour. For us, the expenses is always higher then the income, and if that wasn’t enough, I also need to take time of from my daytime job which means absolutely no income at all during the period of a tour plus the extra expenses I get from the tour that does not get covered by the tour-income. You see where this is going?

“We have done four tours this year alone and each one of them have made us lose money. I have actually NEVER done a single tour and made a single dime in the end of the day. I am actually paying money to do shows for you guys. And the saddest thing about this is that the industry expects you to do so. Something must be seriously fucked up when for example the driver, the sound guy, the merch guy, the tour manager etc. makes more money on a tour compared to bands on the bill that is not headlining?!?

“The one thing I love doing the most with my band is actually being on stage performing for you guys. But my passion for the music simply won’t pay my bills. And as we all know, the record industry is suffering as hell and the record sales are lower then ever. So the only way to grow your band bigger is to do new albums and tour like hell… If you are lucky enough, one day you will be at a level where you actually get paid for you job, And like I said, I can’t afford doing all the tours required to maybe one day be a big enough name to do headline tours and actually make money out of it

“Neither do I see an option to stay with Aeon and only record albums since the reward for me with doing an album is to actually perform the songs on stage. And if I can’t do that, there is simply no point for me to go on.

“So with this being said, I am now leaving the world as a ‘professional’ musician. Because you are considered to be a professional musician if you have released 4 albums world wide and toured Europe, US, and Japan right?!? It’s ironic in many ways… It’s pure charity.

“A big thanks from me to all the fans that has been supporting us through the years, Metal Blade Records for being a super professional label and not least, all the crazy and awesome guys in all the bands we have had the honor to toured with. Cheers!!!!”

Unbelievable Swedish death metal band Aeon are streaming their entire new album Aeons Black. The album is Aeon’s fourth full studio album and is set for release on November 20th. Aeons Black is the follow up the the bands 2010 album Path of Fire and was released via Metal Blade Records.

You can listen to the album here.

“This is definitely our most varied album to date; it has heavier songs, yet it also has lots of fast blastbeats and double bass drumming. It’s groovier this time, which I think we lacked on our last album, ‘Path Of Fire’, which was fast-paced almost all the way through. That, and the amazing mix by Ronnie Björnström, makes me feel pretty confident that this album will appeal to more people than our previous albums. And no, we have not gone softer in any aspect; it’s just easier to catch with all this grooviness. It’s metal right up your ass!”

Swedish death metal groovesters Aeon have released the song “The Glowing Hate” from their upcoming album Aeons Black.  The album is due to drop November 20th via Metal Blade.

You can find the track streaming over at Metal Sucks by clicking here.

Aeons Black is Aeon’s fourth full length release overall and the follow up to 2010’s Path of Fire.  Guitarist Daniel Dlimi recently had the following to say about the song:

“My goal with ‘The Glowing Hate’ was to write a really diverse song containing all sorts of elements and influences. Personally, I think it turned out great and it’s also the song that I am most satisfied with of the ones I wrote for the album. I also think [vocalist] Tommy [Dahlstöm ] managed to write really great lyrics and awesome vocal patterns for it, and as usual it’s all about our everlasting hate against religion. The spoken parts at the end were something that Tommy and I came up with over a piss-warm beer in the studio after we were done with the main vocals of the song. It sounded cool so we decided to keep it.”

Swedish death metallers Aeon have released a lyric video for the song “Aeons Black.”  The song comes from their upcoming album of the same name and  is due for release November 20 on Metal Blade.  This is the band’s fourth release overall.

Guitarist Zeb Nilsson had the following to say about Aeons Black:

“This is definitely our most varied albums to date; it has heavier songs yet it also has lots of fast blastbeats and double bass drumming. It’s groovier this time, which I think we lacked on our last album, Path of Fire, which was fast paced almost all the way through. And no, we have not gone softer in any aspect; it’s just easier to catch with all this grooviness. It’s metal right up your ass!” 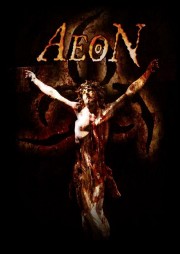 At long last, Death Metal dealers Aeon have found their new punisher of percussion. Enter Arrtu Malkki, from the band’s original line-up. Arrtu joins the band replacing Nils Fjellström, who was his replacement in 2002. Hailing from Ostersund, Sweden, the band auditioned and interviewed many only to find their solution in their hometown, which was also a deciding factor.