ATHEIST are streaming previously unreleased live footage of the band’s classic line-up performing the track “The Formative Years” at the band’s official YouTube page. The footage is taking from the forthcoming deluxe CD + DVD reissues of the technical metal pioneers’ early works.

The video, restored from footage shot at the Waters Club in 1991, features legendary ATHEIST bassist Roger Patterson playing what would be his last ever show before his death. 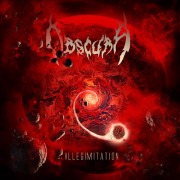 German death metallers, Obscura, have announced they will be independently releasing a collection of demos entitled “Illegimitation.” The collection will be released in March 2012 and will include ten never-before-heard tracks, including the band’s earliest recordings from 2003, unreleased songs from the “Cosmogenesis” sessions of 2006, and brand new cover songs with the newest line-up from 2011.

The band’s latest release, “Omnivium,” was released in March 2011 through Relapse Records. 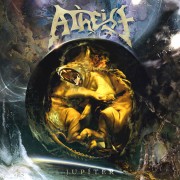 “Jupiter”, the fourth album from the band was released on November 8th, 2010, through Season of Mist. 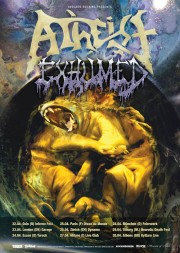 Extreme technical metal pioneers Atheist have announced plans to tour Europe in April 2011 with Exhumed. The tour is in support of the band’s fourth album “Jupiter” which was released on November 8, 2010 through Season Of Mist. This album will be the first since the band reunited in 2008.

Frontman Kelly Shaefer comments: “Greetings everyone, thank you all for the overwhelming support of our new album ‘Jupiter’, we are humbled by all of the nice things being said about the new stuff and cannot wait to bring it to the stage. So now it’s time to come pull some faces off in Europe on our first headlining run in support of the new album! And we are stoked to share the tour with the boys from Exhumed. We are able to play a few places we have never been before so we are all very excited about that, as well as the fact that we of course have some fun new shit to play live – the songs from ‘Jupiter’ along with songs from all three prior albums. See you all on tour in 2011!”

The band’s last studio album “Elements” was released 17 years ago on August 30, 1993 on Metal Blade Records. The band reunited to record “Elements” after disbanding 1992. Atheist disbanded again after the release of “Elements”.