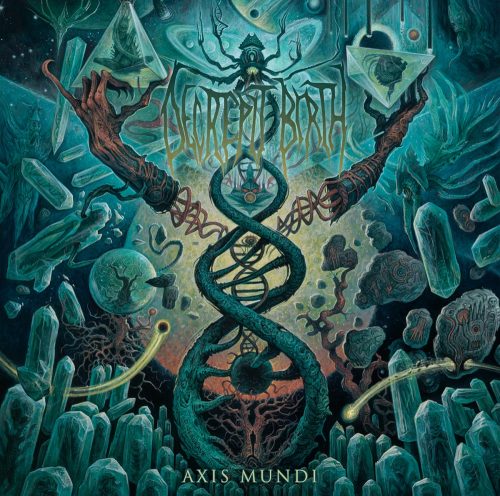 Many death metal disciples are rightfully rejoicing over Axis Mundi, the return offering from tech death vets Decrepit Birth. ‘Hieroglyphic’ is one of the most intimidating musical performances of the year and so what could be more perfect for the band to release as a playthrough track? You can check out the dizzying spectacle of complete and utter sickness below.

“We’ve gone through an evolution throughout the years” says founding member and primary songwriter Matt Sotelo. “The last couple of albums we had, Diminishing Between Worlds and Polarity, were more progressive death metal. They were different from …And Time Begins, which is a different genre of death metal. It’s more brutal. I’m the type of guy who likes to experiment. …And Time Begins has no solos. It’s all really fast palm-muted riffs. The other albums breathed more with the guitars. I let chords ring out on Diminishing Between Worlds and Polarity. Axis Mundi is combination of all the stuff I’m into. I like it a lot right now. It’s more melodic. The riffs repeat intentionally. I want to have fun with these songs”. 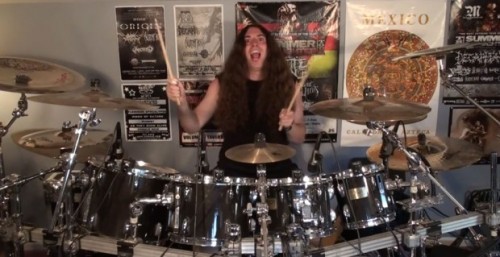 Santa Cruz death metal outfit DECREPIT BIRTH have been working on new material which will be the follow up to their brutal 2010 release, Polarity.

Drummer Samus has been keeping his chops up with his newest cover of “Dance of Eternity” by DREAM THEATER.

Samus comments on the new material: “This one is gonna be fucking nasty.  Matt and I have bee on Skype every week or so, throwing ideas around each other, bong hits, comparing our nipples, etc… but I have nothing further for you as of this moment.  The music is coming”

“Dance of Eternity” as interpreted by Samus can be rocked HERE. When I clicked on it I also got an ad before the drum video for Bud Light Straw-Ber-Ita. How freakin disgusting can you get?!!! Ewwww!!!!! Thank God the Samus vid was worth it. Bleghh.

Three of the heaviest bands around, Cryptopsy, Cattle Decapitation, and Decrepit Birth, have announced that they will be joining forces for a truly brutal tour of Europe.

Travis Ryan, vocalist for Cattle Decapitation, had this to say:

“It’s great to hit the road with our friends Cryptopsy and Decrepit Birth again… and this time, in Europe! We’ll be hitting some spots harder than usual and some spots we’ve never been and we’re always into that. This might be the only time this year you guys see us so be sure to come out and rage with us!”

California death metal band Decrepit Birth have had a spell of bad luck, the band’s tour bus caught on fire and then the van they rented to replace the original was broken into. This has forced the Decrepit Birth’s hand and due to financial reasons they will no longer be able to continue the tour with Obituary. Honestly, this just straight up sucks and my heart goes out to these guys. There is a paypal account you can send donations to for the band to get a new van after the jump and if you have five spare bucks I am sure these guys would appreciate it.

You can read the bands statement here.

California grindcore act, Cattle Decapitation, have announce a United States tour. The tour will last from April 20th through May 18th and they will visit eighteen different states. The band will also receive support from Origin, Decrepit Birth, Aborted, Rings Of Saturn, and Battlecross. Cattle Decapitation has also announce they have finished their new album “Occupation Domination” and they will release more information soon 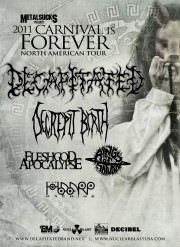 Polish technical death metallers Decapitated will return to North America for an annihilating headlining run this fall in support of their new album Carnival Is Forever. The album was released on July 12th via Nuclear Blast and had the highest first week sales of the band’s career with over 2,100 copies sold.

“I’m here to tell everybody that the tour starts the 30th of September and we will play the biggest cities through the 30th of October. This tour is together with death metal beasts Decrepit Birth, new death metal visionaries from Italy Fleshgod Apocalypse, and two new acts Rings of Saturn and The Haarp Machine. It will be a great death metal party for sure!!! DO NOT MISS THIS!!!!!!!! On this tour we will play every song from the new album Carnival Is Forever together with old classics.”

California death metallers Decrepit Birth have just announced that they will be missing 13 of their upcoming shows due some legal issues their drummer Samus is having.  The band has released the following statement:

“Unfortunately, Decrepit Birth will miss shows booked from February 21st – March 6th. We just received news that our drummer Samus has been forced into legal obligations which are preventing him from leaving his home state of New Jersey until early March. The situation is out of our control, and we apologize to all of our fans who planned on seeing us at those 13 shows. The “Spread the Venom” tour will continue as scheduled, although Decrepit Birth will be missing the first 10 shows of it, and will jump back on in San Francisco, CA. March 7th, at Slim’s to finish out the rest of the tour. Again, we apologize for this unforeseen situation, and plan to make up for the 13 total shows we have to miss.” 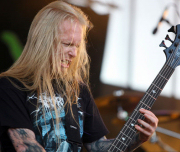 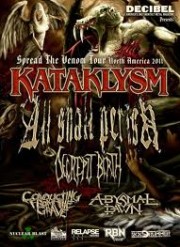 Canadian Death metallers Kataklysm have announced the tour dates for their upcoming North American “Spread the Venom” tour. Beginning in Cleveland on February 24th the tour ends on March 20th in the bands home town of Montreal. Supporting acts include: All Shall Perish, Decrepit Birth, Conducting From The Grave, and Abysmal Dawn. The tour is in support of their newest album ‘Heavens Venom” released April 13th on Nuclear Blast

Frontman Maurizio Iacono on the topic of the tour: “In just about a month we will embark on Kataklysm’s longest one way headlining stretch crossing four continents in nearly 20 years, Heaven’s Venom has been welcomed with open arms by fans and critics alike across the globe. As I mentioned before in interviews, Heaven’s Venom is a very personal, aggressive and dark Kataklysm album that hits home. We love this album and want to share its anger with our fans! We want to play places we have never been before and also revisit our loyal supporters while creating some new fans along the way. One thing we know is that this will be the only time you will be able to see the band on this record or for a long time. So don’t say, ‘I’ll catch them the next time,’ because there might not be a next time. We are thinking of taking along break after this massive trek and who knows what will happen next.”