Nothing goes together better than Nightwish and ice hockey

When you think of hockey, no doubt you think of a sport driven by testosterone that is known for its brutal fist fights, and love of Nightwish.  It’s a well known fact that hockey players and fans alike are huge fans of female fronted symphonic metal bands, so it should be to absolutely no one’s surprise that the Nightwish song “The Last Ride Of The Day” has been chosen to be the 2012 IIHF Ice Hockey World Championships official theme song.  The championships are taking place May 4-20 in Helsinki, Finland and Stockholm, Sweden and tickets are still available.

Nightwish keyboardist/mainman Tuomas Holopainen had this to say about the honor:

“When I heard that we might be involved with the event, I called all the bandmembers right away, and we were all pretty excited.”

“The Last Ride Of The Day” is taken from Nightwish’s 2011 release Imaginaerum released on Nuclear Blast.

Finnish symphonic metal group Nightwish are continuing their 2012 touring regimen. Starting in September, the band will hit twenty different states along with label mates, Kreator. Currently, Nightwish is winding down a European tour, which will end next week.

Nightwish released Imaginaerum last year on Nuclear Blast. Still yet to come is the movie that pairs with it, which depicts memoirs of a dying composer’s childhood. The album and movie were developed together and both have the same underlying story.

Finnish power metal band Nightwish have released a live video for “Scaratale” from their live concert in Jyväskylä, Finland on March 9, 2012. “Scaretale” was released on the bands 2011 concept album Imaginaerum on Roadrunner/Nuclear Blast. It sounds kind of like a power metal version of an Oompah song and you can watch it here.

Nightwish is trying to make your Record Store Day 2012 (April 21st) a little bit better by granting your wishes and  releasing a limited edition of their EP “Trials of Imaginaerum.”

The EP will consist of four tracks that will include the original demo versions of their songs “Storytime,” “I Want My Tears Back,” “The Crow, the Owl, and the Dove” and “Slow, Love, Slow,” with vocals from Marco Hietala.

As an added novelty when you buy the limited edition EP, you will receive a code to access the fifth unreleased track.

Cover Art Battle: What’s In A Name, Much Less A Cover?

This week we have offerings from some of the most interesting band names in metal; Dies Arae, Haemoth, Majestic Downfall, Nightwish, Thy Catafalque, and Vise Massacre.

***UPDATE*** Vise Massacre is the WINNER!

Even though Nightwish is hard at work recording their new album Imaginaerum, frontwoman Anette Olzon took some time out to contribute guest vocals to fellow Finnish metalheads Swallow The Sun’s new song “Cathedral Walls”.  The song is taken from their forthcoming album Emerald City and the Blackbirds set to be released February 1st on Spinefarm Records.  A video for the song has been released, although Anette fails to make an appearance.  Most likely she’s too busy working on the new Nightwish album.  The video can be seen here.

Finnish hard rock outfit Nightwish have one last trailer clip before “Imaginaerum” will be released next week via Nuclear Blast Records.

You can check out the trailer here.

In this new trailer video, all five band members say a few things about the upcoming album. It also features some orchestral teasers as well as a first glance at the album’s booklet art.

Tuomas Holopainen, keyboardist for the Finish rock act, Nightwish, was interviewed recently. In the interview he discusses how he feels about the band’s new album, what the fans will think of it, and the movie that goes along with it.

The band’s upcoming album, “Imaginaerum,” will be released January 10th 2012 in the U.S. through Nuclear Blast.

Finnish hard rock outfit Nightwish have released the music video for “Storytime.” The single will be found on Nightwish’ upcoming album “Imaginaerum,” which will be released December 2nd via Nuclear Blast Records.

You can check out the video for “Storytime” here.

Tuomas Holopainen, keyboardist for Finish rockers, Nightwish, was interviewed recently. In the interview he discusses the new album, the film, their tour, and more.

Nightwish’s upcoming album, “Imaginaerum,” will be released  January 10th in North America and December 2nd in Europe through Nuclear Blast.

Finish rockers, Nightwish, have released another teaser for their new song “Storytime,” off their upcoming album “Imaginaerum.” This will be the first single for this album and the single will be released November 11th.

The new album will be released December 2nd through Nuclear Blast.

Finnish hard rock outfit Nightwish have released an exclusive making of video for their upcoming album, “Imaginaerum.” In this teaser video, keyboardist Tuomas Holopainen gives some insight into the making of Nightwish’s new album. You can also take a first peek at behind the scenes footage from the film set. 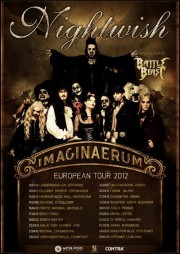 Finish rockers, Nightwish, have announce a European tour entitled the “Imaginaerum World Tour.” The tour will last from April 11th through May 8th and will receive support from Battle Beast. To see the full tour schedule click here.

Nightwish have announced that their new album “Imaginaerum” will be released in Finland on 30th November and then throughout the rest of Europe on the 2nd of December.

This will be the band’s first release through their new label after signing with Nuclear Blast Records in Germany last month.

The album cover art was done by artist Toxic Angel and this is what Tuomas Holopainen, the band’s keyboardist and songwriter, had to say about the artwork.

“Originally, this was supposed to be the centerfold image of the album but once I and some mates saw the final image, we immediately knew that the hunt for the actual cover artwork was over. I believe this is Toxic Angel’s finest piece of work yet, capturing the deepest essence of what Imaginaerum is all about. The power of imagination and places of wordless wonders, magic and awe, of longing and the surreal. I emphasized from the start that not a single living thing should be seen in the picture, and Toxic was able to create that sublime but desolate, “all this waiting for you, and you only” – feeling. All you need is the courage to enter”.